As mentioned in my previous post, I have finally revealed the nature of my Manhattan Project. I have written a book, Lame Adventures: Unglamorous Tales from Manhattan. It’s comprised of a foreword and 25 Lame Adventures illustrated with 44 black and white photographs. Most of the tales originated on this site, but compared to how polished they are now in book form, it was as if I initially wrote them in Pig Latin. 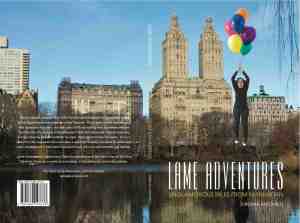 When I started writing Lame Adventures in January 2010, I had dreams of a book deal. I quickly learned that that is probably the most common dream of every writer with a blog aside from the usual dreams about flying or walking in public naked. With the proliferation of bloggers all chasing the same elusive dream, I realized that catching it was not going to happen for the vast majority. Therefore, I was determined to find another way to make my dream come true while remaining true to my brand for this is my Lamest Adventure ever.

Last summer, I heard about Create Space, a self-publishing service that’s affiliated with Amazon. This intrigued me very much. I thought that I might be able to put my tome together in time for holiday season. That was almost as daft an idea as when I revealed at age five what I wanted to be when I grew up.

There are formatted Word templates on the Create Space site that can be downloaded at no charge. That’s what I used, but with significant tweaking. Create Space offers a variety of paid services that can quickly add up to a king’s ransom. To me, the point of self-publishing is two-fold, to have a calling card showcasing one’s dexterity with the quill, and to make a few bucks — not to sink into debt. What I did was assemble my own stellar creative team. Everyone worked for free or for a paperback copy of the book. Aside from purchasing proof copies to see how it looked in print, my primary expense was $15.40 for the helium-filled balloons that are carrying me over Central Park on the cover. 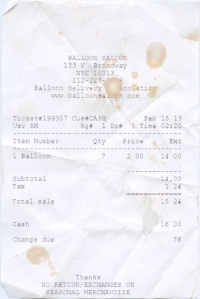 Milton was on board with me from Day One. He was instrumental in helping me select the blog posts I rewrote, and he guided me with the new material written exclusively for the book. Recently, he confided:

Milton: I’ve read your book so many times I feel like I’ve written it myself.

After missing my holiday season deadline, I lowered my sights and aimed for one that was attainable: allergy season. I would have liked to have finished my book months earlier, but I did not want to reveal my real name, Vizsla Crankenhack, on a half-ass vanity project. Over the course of the seven months it took my team and I to put this book together, we like to think that the end result is now full-ass, and much better than it’s current listing on Amazon’s Best Sellers Ranks: 320,815.

Milton, my graphic designer bud, Godsend, and I remain old school about books. We think that the paperback can serve as a fashion statement. 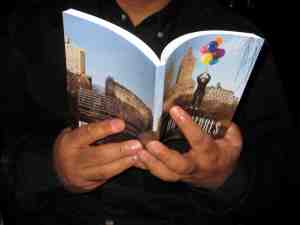 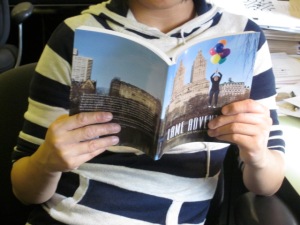 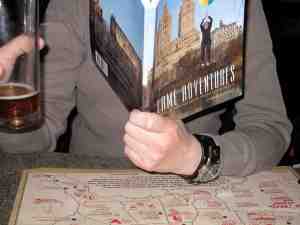 Goes down easy with beer.

Furthermore, this slender tome is the perfect accessory to carry in public spaces, especially if those spaces are tubular — trains, planes, tunnels, sewer pipes. It can also provide a welcome diversion to upcoming summer beach reading for anyone craving a fix of life in the Big Apple while soaking up rays in Paradise. If you’re not living in New York, but you’ve always wondered what it’s like to be a real New Yorker, allow this book to save you thousands of dollars on air fare, food, lodging and line waiting. Hot tip: try to get your mitts on a copy now before the New York City Tourism Bureau bans it. Did someone say?

Response to Someone: Nice try but no.

Bottom line: if you like this site, odds are good that you’ll like the book. For readers that prefer e-books, Godsend is working on the Kindle conversion. It should be ready soon. Meanwhile, the trade paperback featured in these images is available on Amazon here in the US and in the UK. We’re still trying to activate the Search Inside! feature. As for why it appears to be in the Children’s book section instead of Humor, I have an email into Amazon asking if this is their idea of playing a joke on me.