Lame Adventure 355: She Swims with the Fishes

Recently I mentioned to Greg, my sidekick at The Grind:

Me: My arthritic left knee has not been hurting me lately, but my right elbow has been killing me.

He pondered this and suggested:

Greg: Maybe you’re favoring your knee with your elbow.

Three weeks ago, my knee was motivated to regain complete function when I was standing on Rodeo Beach at the Marin Headlands in the San Francisco Bay Area with my longtime friend, BatPat. We were waiting to be attacked by a hungry California sea lion because I was wearing a sweater that resembled a delicious looking squid.

For fifty weeks of the year, I am an extreme city slicker here in New York, the slickest of cities.  The closest I get to nature is when I see someone out walking their dog, or notice a rat in the subway tracks, a squirrel climbing a tree or the unofficial Gotham City bird, the pigeon, strutting its stuff.  I’m completely fine with these fleeting encounters with pampered pooches and standard urban wildlife.

“Cinnamon raisin bagel, my favorite! Yours, too, perhaps?”

For two weeks of the year, one in December and another in June, I visit my family and BatPat and her family on the West Coast.  For the thirty-five years I have known BatPat she is forever forcing me to commit extreme acts against my glass, steel, concrete and soot-flecked nature such as going on a hike.  On a dirt path.  Surrounded by trees.  Places where the woodpeckers are not animated.  On my most recent trip West, she suggests:

BatPat:  Let’s go to the beach! 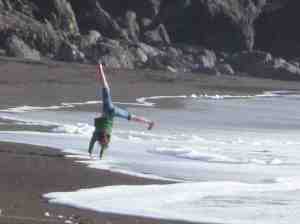 Yay, visit the cold ocean where we can go cartwheeling and pull a groin muscle!

Me:  Why?  It’s colder there than the inside of a refrigerator.

BatPat:  We can see the ocean, not splash around in it.  It’ll be nice.

I suggest a compromise solution:

Since it’s not my nature to be difficult, I groan my approval of this idea and begin craving fish for dinner.

No sooner do we step out of the car to enter the center than a marine mammal rescue worker comes running towards us.  Instinctively I think she may have mistaken my Jack Purcell badminton shoes for flippers so I assure her:

The Rescue Worker runs down a hill.

Me:  Please tell me that we’re taking the car.

We climb into the car.  BatPat floors the accelerator and we’re tailgating the rescue vehicle.

We park and join the cluster of fellow sea lion stalkers that gather to witness the release.  The ocean is rough and so foamy that it reminds me of shaving cream, not to imply that it would ever be on my “to do” list to shave my gams with sea foam, but if offered a significant sum, I might use it on that patch of fur that’s sprouted from my lower back. 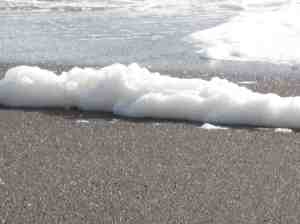 On foot, we follow the crate carrying the sea lion, a female that was either injured or ill, but has since been nursed back to health at the state of the art facility. 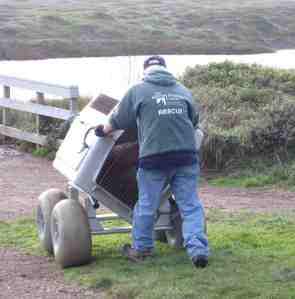 The rescue workers roll the crate down to the beach and prepare for the rehabilitated animal’s release back into the wild.

The workers hold rescue shields, and stand in formation — two rows that the animal, if everything goes according to plan, will waddle between straight to the sea for supper.  Before the door to the crate is opened a rescue worker makes an important announcement:

Rescue Worker: If she charges you, run.

I turn to BatPat who is watching the sea lion’s cage as if in a trance and give my own advice:

Me:  Maybe it would behoove us to get a head start and run back to the car now.

Just as I am loading the reel with the story of my life in my head so it can flash nicely before my eyes as I’m being chewed to pulp, the cage door opens.  The sea lion follows protocol and waddles between the rescue workers with dignity.

She moves down the sand with such style and grace, if I were a talent agent I’d be inspired to sign her on the spot to appear on Dancing with the Stars – and partner her with Michael Phelps.

“Is that supper I smell?”

She has plans of her own and chooses to return to the sea that is her home. 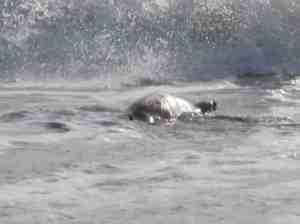 Now we see her.

Lame Adventures-style buffoonery aside, The Marine Mammal Center is a wonderful Northern California institution to visit if ever in the area.  Click the hyperlink to check out their web site to learn more about their commendable work rescuing and rehabilitating sea lions and seals.

95 responses to “Lame Adventure 355: She Swims with the Fishes”