In August I heard that the Public Art Fund was presenting an exhibit called Discovering Columbus that would open in September. 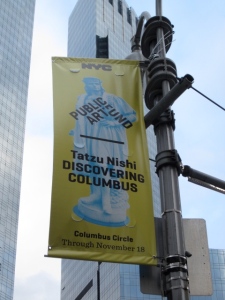 The artist Tatzu Nishi was designing a penthouse apartment around the Christopher Columbus statue in Columbus Circle at Central Park West and Broadway here in Manhattan.  Admission price would be my second favorite four letter f-word, free.  Over beers, I told my pal, Milton, about the statue that was now encased in scaffolding: 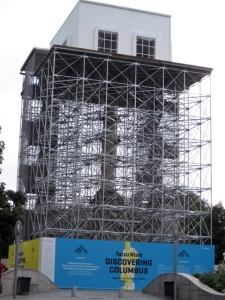 Penthouse on top of scaffolding ensconced statue pedestal base.

Positing this question to him over beverages was a key component of my strategy.  Milton is not a fan of climbing stairs. The downside of visiting the Christopher Columbus penthouse is that it happens to be in a six-floor walkup. Fortunately, due to the upside of the decision-impairing effects of a few pints, Milton was feeling game.

What drew me to this exhibit was the sheer novelty of really seeing a thirteen-foot statue that I have only known from afar for the twenty-eight years I have lived on the Upper West Side.  Whenever I walk past it I primarily glance at the sixty-foot pedestal base and the protrusions in the column representing the sailing ships, the Niña, the Pinta and the Santa Maria.  I, like my fellow New Yorkers, have been completely oblivious to the details of the marble statue on top. Apparently, it was sculpted by Gaetano Russo and completed in 1892 in commemoration of the 400th anniversary of Columbus landing in America.  Even though Columbus Circle is a vast transportation hub, I’m quite sure this is not the exact spot where the legendary explorer set anchor. Presented with the opportunity to see this monument up close and personal in a living room setting with spectacular views and full of furniture from Bloomingdale’s and Mitchell Gold, hey, count me in.

Fast-forward a month later. Milton is now stone cold sober, recovering from a cold and feeling much less game about this visit than me.  The fact that this exhibit is free is a huge plus with him, and I did the work with getting our timed tickets to attend.  All he had to do was show up and meet me there.  We arrive forty-five minutes early for our 7 pm viewing but we’re told to return a half hour later for they follow the schedule closely.  We kill time roaming the area. 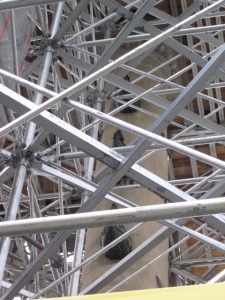 Detail of sailing ships protruding from statue’s column in pedestal base. 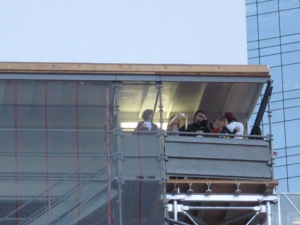 Milton looks up at the outdoor staircase with sheer contempt. 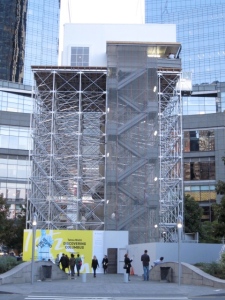 Milton: Do you know what I hate more than anything?  Stairs.

Then, he notices there’s an elevator. 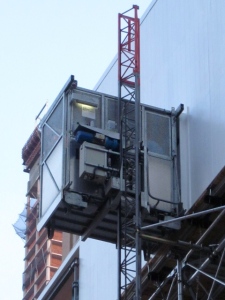 That gives him hope.  A half hour passes and we join the line to enter. 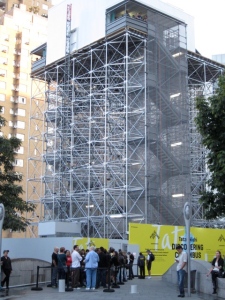 The line moves quickly and the wait is short, but Milton is feeling cranky.

Milton: I can’t believe we’re standing in line to climb six flights of stairs to see a statue.  This is proof that you can get people in New York to do anything.  They’ll climb enough stairs to see a sandwich. 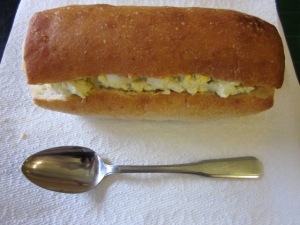 Egg salad sandwich as never seen before with a spoon. This was not waiting for us six flights up.

A worker scans our timed tickets that grant us thirty minutes to view the exhibit.  Milton, looking longingly at the lift, awkwardly asks:

Milton:  Is it possible to take the elevator, or is it just for, you know, the handicapped?

When he says “the handicapped”, his voice drifts for he anticipates the answer that’s coming.

Exhibit worker:  It’s just for people that really need it.

Milton resists mentioning that he’s recovering from a cold.  He crabs at me:

I figure that when we reach the top we’ll both be huffing and puffing like two steam engines. It’s possible that one or both of us will require a hit of oxygen from a tank.  The further we climb the more the gray steel utilitarian steps make creaking sounds. 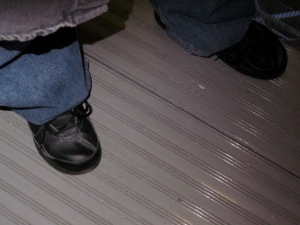 Milton:  Did you hear that?  Now my vertigo’s setting in. [light bulb] Oh!  Did I tell you that I just saw that film again when they screened it at Film Forum?

Me:  Really?  They screened Vertigo?

I chatter with Milton about Alfred Hitchcock’s masterpiece to distract him.  I take a picture of the view up Broadway. 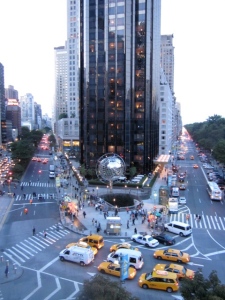 Looking north up Broadway where car lights are bright.

Somehow we reach the top without collapsing.  In fact, neither of us is remotely winded.  It is an easy climb.

We walk down a narrow hallway, enter the 800 square foot living room with a sixteen-foot tall ceiling and see the centerpiece attraction, Christopher Columbus. 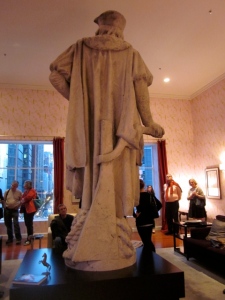 This guy is hard to miss. 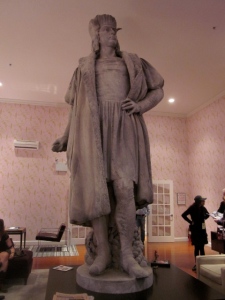 Yes, that’s the 120 year old Columbus Circle statue standing on a coffee table in the middle of a living room.

The statue is made to appear like it is perched on a coffee table.  Actually, the table has been built around the statue,  which is an imposing presence and showing its 120 year age.  I agree with Roberta Smith, the reviewer with The New York Times who observed that,  “… weather and pollution have reduced the marble to something that looks like cast concrete.”  After the exhibit ends the statue will undergo cleaning and repair. 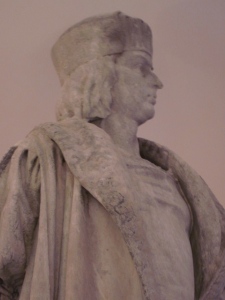 “I need a bath and some work done.” 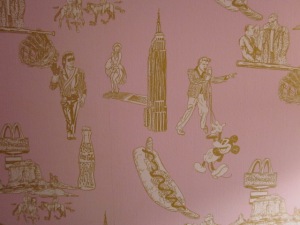 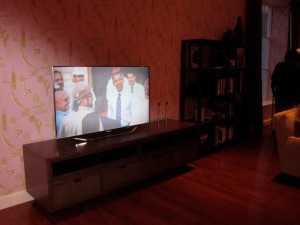 Obama’s in the house!

The sofa and chairs are plush and look very comfortable. 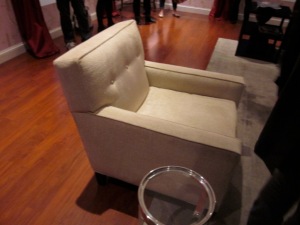 The polished hardwood floors are covered with area rugs.  The bookcase is full of books by American authors encouraging visitors to sit back and leaf through the pages, but during our visit, no one read. 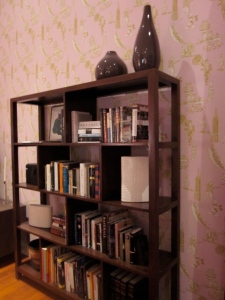 Bookcase with untouched selection of books. 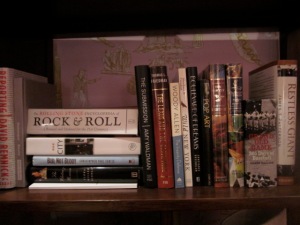 The primary focal points were the statue and the view. 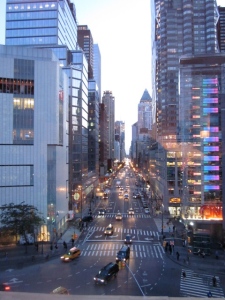 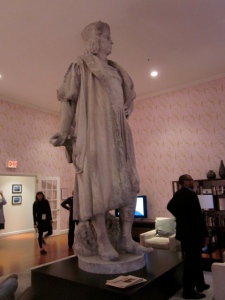 Visitors like to duplicate the Columbus pose in front of the statue. Milton and I resisted doing this. 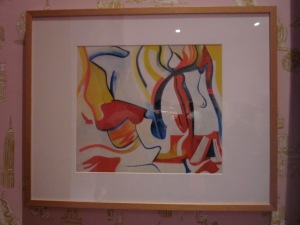 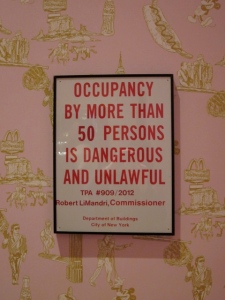 Being in such close proximity to the statue and observing this magnificent view from the same perch reminded us that this is usually only available to New Yorkers that were born as pigeons. 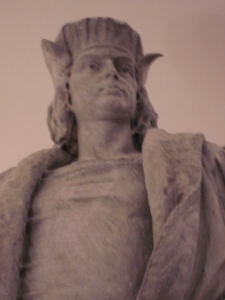 This exhibit, which runs through November 18th, is a treat for anyone without wings.  Even Milton’s grousing came to an abrupt end as he took photographs with his iPhone.  Milton, his dour mood lifted, observed:

Milton:  His outfit is so fab! 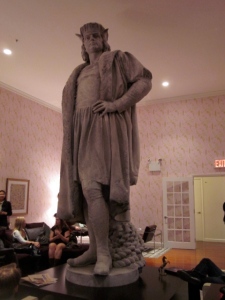 The original “I see land” pose.

102 responses to “Lame Adventure 344: Visiting Christopher Columbus in His Penthouse”