On the second to last day of summer, Milton and I attended our last theater production before the advent of fall.  We took advantage of the 20 at 20 discount, a discount that allows theatergoers to get tickets to select off-Broadway shows for $20 twenty minutes before curtain.  The show we chose to see was Forbidden Broadway: Alive and Kicking!, a satirical send-up of Broadway musicals.

A hilarious spoof on Broadway musicals from Wicked to Once to The Book of Morman and many other shows in-between.

When Milton said to me sotto voce, “Pia Lindstrom,” I had my usual reaction:

Then, we scored our cheap tickets, seats in the middle of the last row of the mezzanine (a fancy name for the balcony). 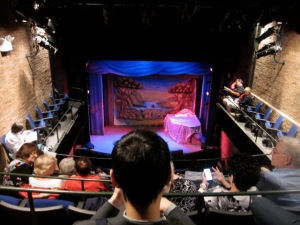 View from the rafters – nephew of Max Headroom did sink in his seat once the show got underway.

Milton went to the restroom.  When he returned he reported:

Milton:  Pia’s sitting in the fifth row of the orchestra.

Me:  Thank you Pia stalker.

While we were watching from the rafters and Pia Lindstrom from the premium orchestra, everyone laughed uproariously, Milton got wheezy, and then the show ended and everyone left.  Barely five steps outside the theater Milton mutters in a confidential tone:

My head becomes a periscope, I don’t know where I’m looking, I don’t see any guy in a plaid shirt, much less anyone from Saturday Night Live.  I bleat:

I realize that Horatio’s been off the show for close to a decade.

Me:  Bobby Moynihan?  He plays Snooki.

Milton:  I think that’s who it was.

Whenever I am out with Milton, rarely is there ever a time when he does not spot some celebrity on the street that I often miss even after he points them out.  Milton has an excellent eye for noticing famous people.  I don’t.  At all.  I’m almost celebrity sighting blind.

These are the types of sights that catch my eye:

Fallout shelter sign — who knew that these are still around, much less still around the Upper West Side? 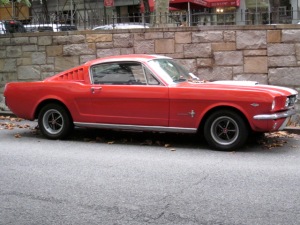 Purple stuffed ape in garbage can with wild thing sign. 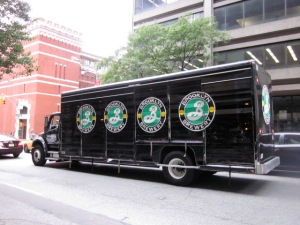 Me if I were a balloon in this past sweltering summer. 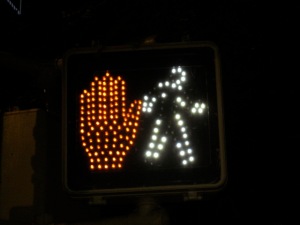