Currently the Lincoln Center Festival is happening here in New York.  Lincoln Center describes this festival as “an effort to look outside the Western European canon, to broaden notions of classicism by presenting classical works from other parts of the world.”  Milton got us tickets to Chekhov’s Uncle Vanya as staged by the Sydney Theatre Company, a theater company run by Cate Blanchett and her husband, Andrew Upton.

Upton adapted Chekhov’s play and Tamás Ascher directed the terrific cast starring Blanchett as the ravishing Yelena.  Hugo Weaving, and Jacki Weaver, who first came to our attention when we saw her in the film, Animal Kingdom, in 2010 are amongst her co-stars.  Milton was certain that this limited ten-day run was going to garner rave reviews and would be a very tough ticket.  He was right.  This story about bleak love-starved bumblers spending summer together in a run down estate was both hilarious and sad.  It’s not every day that I can declare misery so entertaining.  Milton pronounced Blanchett’s performance, “Luminescent.”  She is sensational on stage and I feel very fortunate to have finally seen her grace the boards.

The theater where this play is being performed is the cavernous New York City Center.  It seats 2,750.  I am quite sure that the entire brief run is sold out.  We sat in the last row of the mezzanine, seats that were rather high and quite far from the stage.  At intermission Milton announced:

Milton:  We’re sitting so far away I don’t recognize anyone.  Which one’s Jacki Weaver?

Me: Jacki’s the nanny.  Cate’s the sexy blonde.  Hugo Weaving’s the doctor.

Even without knowing who was who, and seeing it from seats located in Englewood Cliffs, New Jersey, it was a brilliant production and very entertaining.

There were tiers of theater above and behind us.  I think those sections were located upstate.

It is against theater policy to take photographs of the production, and we did not want to get kicked out.  While waiting for me outside the theater Milton did take this gotcha shot of Tom Hanks with an unidentified female companion. 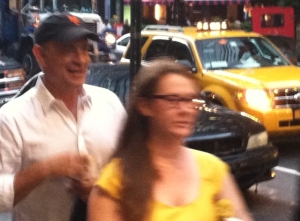 Odds are good that he sat considerably closer than us.  When Milton was in the men’s room he noticed Bill Irwin at the urinal, but he resisted taking his picture.  I’m sure there were other famous people in our audience, but since I emptied my bladder before leaving my garret, I did not scope out the women’s restroom.