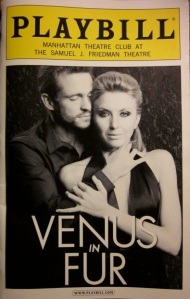 Announcement: you must see the play to find out.  Sorry, no spoilers here in Lame Adventureland.

Yet, I can report with authority, holy crap does Nina Arianda have it!  Whatever “it” is, Milton and I sure know it when we see it.  We got quite an eyeful and earful.  Nina, coupled with Hugh on the boards, shares an ocean of “it” with him.  Milton and I, sitting in second row orchestra seats that we scored on the cheap last August, were in our bliss getting splashed.  Afterward, over a beverage, we discussed the perfect cast.

Milton (dreamy):  I never thought a man could look so good in a vee neck t-shirt.  You know, he and I made eye contact.

Me:  He looked in your direction.  He’s happily married to Claire Danes.

Me (bragging):  But I did get Nina’s number when you were in the bathroom.

Yeah, right, in my dreams.  Three times a year over the course of 19 minutes total, I am mercy-pleasured by people of my own gender in orthopedic shoes with names like Dinah Ickberg.  Post-how-we-do-it, they usually announce to me that they’ve decided to undergo a dramatic religious conversion and will head straight to a nunnery from my love-nest with me shouting after them:

Even if an endorsement from Lame Adventures only carries about as much weight as an ant’s testicle, Christopher Isherwood, the revered theater critic for The New York Times, backs me up with his review.  In the November 7th issue of The New Yorker, John Lahr profiled Nina.

He described the response of the play’s director, Walter Bobbie, to her audition for the part of Vanda.

Bobbie wanted to stop the audition immediately.  “She showed me how the play worked,” he said. “I was afraid someone would cast her by the end of the day.  It was that breathtaking an audition.  I don’t know how to explain it.  But when the real thing walks into the room you know it.”

Venus in Fur, produced by the Manhattan Theatre Club, is playing at the Samuel J. Friedman Theatre through December 18th.