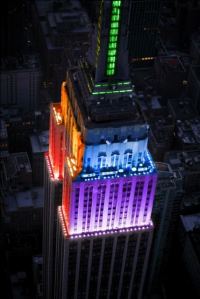 Milton and I were in the East Village attending an excellent off-Broadway play called Unnatural Acts currently on the boards at one of our favorite theaters, Classic Stage Company, when the historic vote for marriage equality was taking place in the New York State Senate.  This play, based on the true story about a group of persecuted gay male college students attending Harvard in 1920, is a disturbing episode that Harvard kept secret for over eighty years.  As tough as it was to watch at moments, and the food coma I suffered thanks to the Pad Thai washed down with a Passion Fruit Mojito I had for dinner didn’t help, after seeing this tragedy we reflected on how far this country has come in its attitude about homosexuality 91 years later.  Certainly, what happened tonight in Albany was remarkable.  Neither Milton nor I ever dreamed that same-sex marriage would be legal in our lifetime, but three years ago, we never imagined this country would ever elect an African American president, or that we’d ever find Osama bin Laden.  We continue to feel wonderful about being wrong.

Eagle-eyed Lame Adventure contributor, Coco, while stiletto-pounding the pavement in her lower Manhattan neighborhood earlier this week, snapped these photos in the windows of a Levi’s store in anticipation of this historic vote. 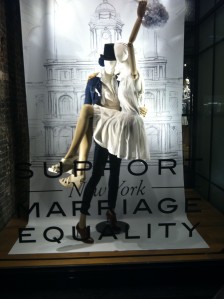 She ain't heavy she's my spouse. 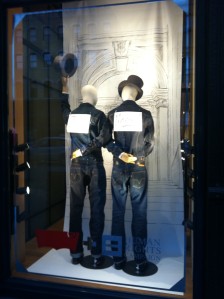 Hat off, arm in arm!

Possibly, I’m prejudiced but the just married boys strike me as a bit shy with their backs turned when paired with the jubilant in your face butch/femme girls.  Coco opined that the girl-on-girl display was much more fun.

Friday evening, while Milton and I were taking a pre-play stroll down University Place, we momentarily took a break from bickering about his insistence that The Killing of Sister George is the best lesbian themed film ever, when we noticed these eye-catching Ralph Lauren Rugby store windows. 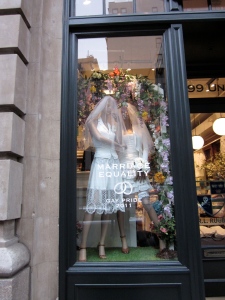 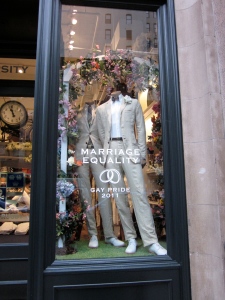 We were so bothered by why the chaps were missing their heads, we went inside to ask what that was about.  The adorable clerk explained that in the haste to pull this window display together, Ralph’s Visual Management department did not have male mannequins with heads available, but soon, the guys will have their heads.  Milton told me that he’s going to keep an eye on those windows.