Much of the country is in a heat wave. 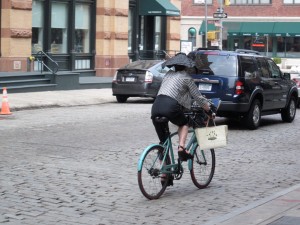 Channeling my inner Bill Cunningham, interesting sun bonnet from behind.

On Thursday, temperatures in Gotham City reached a high of 96, but the heat index – whatever that is — the “real feel” temperature (?) made it feel more like 102.  All I knew was that it felt hot as a kiln outside. 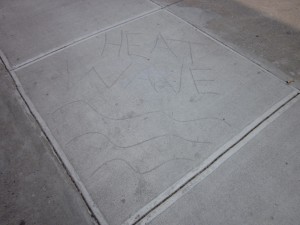 My go-to source of weather news, the sidewalk on Greenwich Street.

Thursday was also the day when I inconveniently left my quart-size Cold Brew iced tea bottle at home, but I did remember to bring a new box of tea.  I realized this snafu as I was hotfooting my way up to the subway station, running late as usual.  There was no time to return to my sanctum sanctorum to retrieve this vessel I value on the level of my glasses, cell phone and camera, nor was there time to purchase an overpriced inferior iced tea on my way into work.  The most practical solution for me to savor a caffeine fix would have been to sit at my desk and chew on one of my new tea bags, preferably with the tag hanging out of my pie-hole, but I resisted pursuing that course of desperate action and was in a predominantly foul mood until my 1 pm feeding.

My boss, Elsbeth, had a dental appointment and arrived around eleven.  Outside my window I noticed that the usually bickering pigeons I call Israel and Palestine perched on the air conditioner have called a temporary truce and are actually sharing the space in peace. 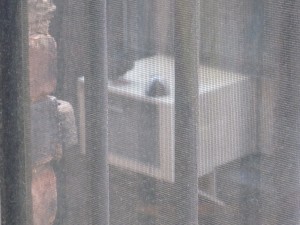 As seen in the above photo, Israel does not even have the energy to stand, or possibly it was further weighted by the humidity.  It is at this same time that Elsbeth starts fiddling with the thermostat, one of her favorite pastimes all year round.  I hear her repeatedly turning buttons on and off.  She shifts the gage from 72 to 85 announcing:

Instantly, I can feel my body temperature soar.

Me (screaming inside my head):  Christ on a cross, woman, it’s the hottest day of the fucking year, open your window!

Me (saying in a helpful cheery tone):  Just open your window, Boss.

She returns to her office and opens her window.  I hurdle my desk and slap that gage back down to 72.  A few minutes later I have to visit the Accounting department three floors away.  When I return, I see the gage has been raised to 79. 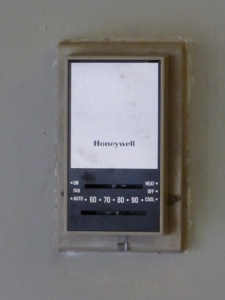 I emit my trademark monosyllabic sound effect that’s a cross between a gasp, a sigh, and an acid-reflux induced retch.

My colleague, Ling, is looking flushed.  She’s wearing a tank top and her hair is puddled atop her head.  Chilly Elsbeth is wearing cargo pants and a long sleeve tunic.  I must remember to suggest she bring her fleece or a wool blanket.

This is due to the heat wafting in through Elsbeth’s open window.  I give up the fight and announce that I have to run an errand.  I step outside into the soup and invest 26 cents into the purchase of a single banana, my contribution to reviving the stagnant economy. 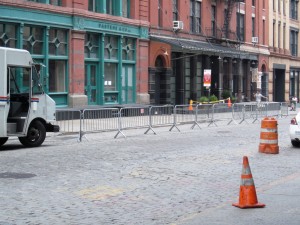 Even the Dominique Strauss Kahn stalkers in the press abandoned their posts across the street from his lair, it was that hot. They completely missed DSK standing in his doorway clad only in flip flops asking for maid service.