Lame Adventure 192: Going Back to the Dogs!

As core members of the Lame Adventures Readership (all three of you) know, every so often, primarily in the warmer weather months, I encounter a pooch that rates a shout out.  Scout, the five-month-old Basenji puppy pictured below is the First Dog on the Street of the 2011 Spring/Summer Lame Adventures season. 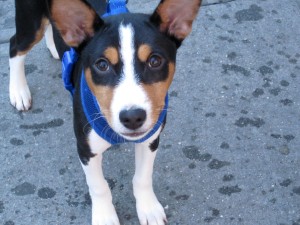 "You get a two second window to get this shot of me, Sis. Don't screw up!"

Ling and I encountered him while walking down West Broadway in Tribeca.  After sharing a mutual “Awwwwwwww, he’s so cute” moment, we caught up with his master.  She informed us that although Scout’s a non-barking breed, he yodels.  I thought:

Me (thinking):  Wow, Scout and I share a character trait.

In my early youth forty-odd years ago, I took it upon myself to try out for the yodeling Olympics in my parents’ house.  Should I fail to make the yodeling team, I was also practicing crowing like a rooster.  Approximately fifteen minutes into my intensive inaugural training sessions alternating between yodeling and crowing at the top of my lungs my father bellowed:

My Father:  God damn it knock that racket off!  You’re giving me a splitting headache!  I’m warning you, just one more peep and I’m gonna knock your block off!  Do you hear me?  I’m not joking!

The urgency in his tone conveyed volumes even though I was never sure where my block was.  Yet, my desire to maintain self-preservation instinctively knew I did not want it knocked off, especially by a guy that excelled in gymnastics and wrestling in high school.  Thus ended my Olympic level yodeling and crowing practice sessions forever.

Scout’s master told us that his breed is of Egyptian descent, even though this little guy is actually a life-long resident of Tribeca.  She added that his favorite hobby is licking the pavement, a hobby I outgrew in sixth grade, adding: 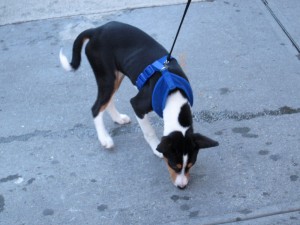 "You call it garbage, I call it treasure."

Currently, Scout’s enrolled in doggie daycare and that is probably a very good idea. According to The Intelligence of Dogs, a book about dog intelligence written by Stanley Coren, Basenji’s are the second least trainable breed.  If it’s any consolation to Scout, my family’s dog, Thurber, a Poovanese (that’s a hybrid Poodle-Havanese designer dog, or as some prefer, Dr. Frankenstein breed), did not even merit a rating although on many occasions, my niece Sweet Pea, has declared him:

It never fails that when I am alone with this incorrigible wildebeest, he will then take it upon himself to play my niece’s electric piano.   Whenever he plays Lara’s Theme from Doctor Zhivago, I think I’m somewhere in snowy Russia with both Ferrante and Teicher.

Scout was not the only special hound I encountered while pounding the Tribeca pavement these warm weather days.  Recently on Greenwich Street, I saw stately Hubert, the canine mayor of lower Manhattan.  Hubert was the only dog I photographed in winter.  A noble nine-year-old Alaskan Malamute, he manages to look warm on the coldest winter day as well as cool in the heat.  In my next life, I’d like to be Hubert, but I suspect I’m much more like yodeling Scout.

"What can I say, everyone wants to be me."