Lame Adventure 189: Waiting for the World to End

As with most anyone with a degree of lucidity, I was very aware that Harold Camping, who my dear friend, Martini Max, refers to as “that mummified modern day Boris Karloff without Karloff’s charm,” predicted that the world was scheduled to come to an end this past Saturday at 6 pm EST.  This was one hour before Milton and I were going to the Public Theater to see the latest play written by Tony Kushner with the catchy title that’s almost as easy to recall as page 37 of Beowulf — The Intelligent Homosexual’s Guide to Capitalism and Socialism with a Key to the Scriptures.  Milton and I had been eagerly awaiting this play for at least two years.  We had purchased our fourth row dead center $20 tickets (Public Theater membership; an excellent deal) the second they went on sale last January 6.  Therefore, the timing of Judgment Day was incredibly inconvenient for us.  My sidekick, Greg, noted that the world’s end would start with a big rolling earthquake.

Greg (reasoning):  Even if it does happen, you might still be able to get your play in.

Greg raised a valid point considering the integrity of New York’s many dedicated thespians and this production was featuring some of the best, Michael Cristofer, Stephen Spinella and Steven Pasquale.  Anyone acting in a Tony Kushner play must be someone supremely devoted to the stage.  Kushner is one of the greatest living playwrights of his (coincidentally, Milton’s and my) generation.  If the world was destined to come to a grinding hellfire and brimstone halt at 6 pm, where should we be?  Milton emailed me:

Milton’s email: If the world is gonna end at six, that’s not when you’d want to be on the subway.

Excellent point.  Milton and I decided to meet at 5:30 at B Bar over on East 4th Street.  B Bar is also a short walk from the Public Theater, and an establishment that grants Public Theater members like us a 15% discount.  Even though the world could be checking out, why pay more?

Appropriately, this was the last ad I saw on my last subway ride – an N train, when I exited at 8th Street. 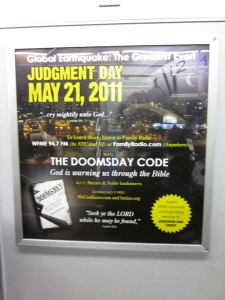 Here is the second to last ad I saw. 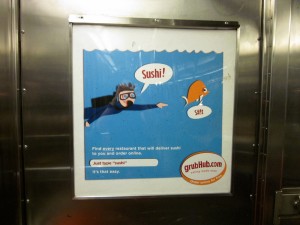 I photographed it because I thought the goldfish’s implied use of a scatological term was inappropriate if I had a seven-year-old child.  Then, I recalled that I have never spawned and the only child in my life, my niece, Sweet Pea, is pushing seventeen.  If she doesn’t utter “shit” by now, that would worry me, and make me think we do not share blood.

Saturday was also a very humid day.  As I was waiting for Milton outside B Bar my hair was doing Full Bozo.  When he arrived he said:

Milton:  Your hair’s so wide today, from behind I thought you were a different person.

It’s capacity to expand that Saturday was actually more terrifying than the world ending.  Although I had originally intended to have my tresses colored and pruned that day, I never made the appointment, not due to the pending possibility of it being doomsday, but I want to look a little less lousy when my sister, Dovima, visits me in June.  My body may never be 30 again, but my hair can still pull off 20 after my colorist and stylist work their magic.

Once inside B Bar we were given a booth across from the toy trucks. 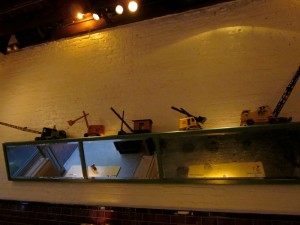 B Bar's wall of toy trucks.

This prompted Milton to reminisce about his long lost boyhood:

Milton:  Do those trucks bring back memories!  I got so many of them when all I wanted was Barbie.

Usually, I order a glass of wine with a meal, but with the planet on the verge of collapse, I decided to live large and order a Mojito.  Milton decided he’d have a Pear Mojito.  I grabbed the drink menu out of his paws and yammered enthusiastically:

I saw Milton’s Pear Mojito on the menu and added:

Milton ordered our beverages.  A short while later, our waiter returned with what looked like Mimosas to us. 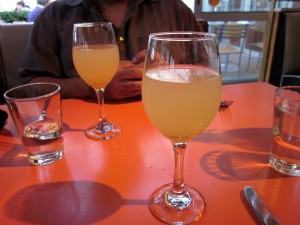 Mystery cocktails with Milton praying patiently in the background.

Milton:  What’s this we’re drinking?  It seems like a Mimosa.

Me:  I hope it doesn’t have any orange juice in it.  You know my gastroenterologist has forbidden me from drinking o.j. … But I suppose if the world’s about to end, what does it matter?

Milton:  I’d still like to know what the hell we’re drinking.

Me:  Let me handle this.

Me:  We’re not complaining about our drinks.  They’re fine, wonderful, we’re pleased.  We’d just like to see the drink menu again.

Our waiter hands me a drink menu.  I read it.

Milton:  What does it say?

I hand the drink menu to Milton. 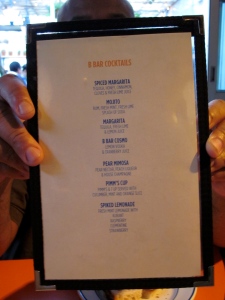 Milton:  What made you think we were ordering Pear Mojitos?

Me:  The power of your suggestion?

Then, my sister, Dovima, who resides in the San Francisco Bay Area, calls me on my cell phone.

Dovima:  It’s already tomorrow in parts of the world.  The rapture’s not happening today.  Enjoy your play.

And we did just that.

This entry was posted in Humor and tagged b bar, judgment day, pear mimosa, the public theater, the rapture, tony kushner. Bookmark the permalink.

2 responses to “Lame Adventure 189: Waiting for the World to End”