While I was walking across the ancient wooden floor in my company’s warehouse to recycle a piece of paper, my heavy soled motorcycle boot caught onto a rusty nail emerging from a floor board.  Fortunately, the nail did not penetrate my boot nor did the g-force of my foot lift it off with the ferocity of a rocket launch.  Then, in its descent it could pierce through some soft, exposed tissue on my being such as my D-cup nose.  A rusty nail protruding from my nose; what a humiliating injury that would be.

Questioner:  What happened to your nose?

My closest friends would probably lie through their teeth and insist:

My Closest Friends:  It doesn’t look that bad.  From certain angles, you can hardly tell.

Translation of  “certain angles” means the back of the head.  Overall, I am grateful that I dodged a bullet (or nail) and did not suffer any harm physically or emotionally.

Had I been wearing flip flops, swim fins, or been walking barefoot, and proceeded to step onto that nail, I would have been hightailing to the doctor’s office for a tetanus shot instead of trekking to the recycling can to alleviate the immense boredom I endure daily at my desk.  My sidekick, Greg, witnessed this incident.  Before I could dramatically bark:

Me:  Remove that nail before someone gets killed!

He grabbed a claw-tooth hammer and was ripping it out of the floor. 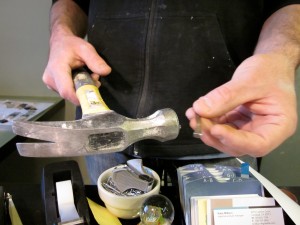 No-nonsense Greg getting the job done.

How someone can sacrifice his or her mortality to a single rusty nail in the foot (or nose) would take effort, but it can happen.  If that nail were implanted deep in the victim’s foot (or nose), and that victim, a stoic idiot named Og, was compelled to ignore his or her excruciating pain completely, that would allow the wound to be a breeding ground for Clostridia bacteria, a bacteria that produces toxins that attack the central nervous system.  Once that happens, it’s checkout time for Og.  At the risk of sounding a tad hard-hearted, maybe the world would be a better place with one less doofus.

My sister, Dovima, is currently suffering an ingrown toenail.  We have emailed each other so extensively about it one might think she had stage four cancer.  Yet, I think maintaining one’s health should be high on the “to do” list.

The building where I work was probably built sometime in the 19th century, so it’s possible that that nail was around when Abraham Lincoln was president.  How impressive.  It’s likely that it was produced from bar iron on a nail cutting machine that looked like this. 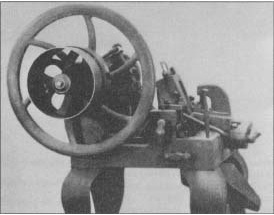 When Greg showed me our nail, I was compelled to remark:

Me:  That looks like something used in a crucifixion.

Realistically, I’m certain that the nails used in crucifixions were much larger. From where I was sitting I might have had a slightly distorted perspective on our nail. 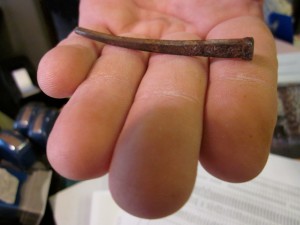 In your face nail.

Our nail with its historic past.  If only it could talk, what would it say?

Nail:  I’m a nail, you moron.  I’ve been stuck in the floor for 150 years until today.  If you’re so interested in the past, read a history book.

Greg then proceeded to trash it, so it’s final resting place will soon be a landfill – better than anyone’s foot (or nose).