It’s the usual dull days of winter at work.  The afternoon was crawling along so anemically, it was if the sands of time fell grain by grain.   I stared slack-jawed and bleary-eyed at my computer screen reading editorial copy written by my Lord & Master, Elsbeth.  She had repeated “traditional” three times in the span of seventeen words.  As Elsbeth struggles to write her prose, I struggle to maintain consciousness while editing that prose, but often I fail and my mind wanders.  While reading a sentence about glaze character, I can just as easily find myself wondering what I’ve lost more – change in couch cushions, socks at the laundromat, or sight of my life’s goals.

As Elsbeth’s handpicked assistant, emphasis on first syllable pronounced with a short a, and an alleged wordsmith, (pronounced with a loud, “Ha!”) one of the many hole-riddled chapeaus I don is as my liege’s editor.  Generally, how we write together is Elsbeth writes the copy first, I edit her, and she edits me.  This goes on and on until one of us collapses, enters a coma, or cries uncle.

As I sat multitasking — scrutinizing my superior’s text and counting the minutes before I could make my escape in the direction of something alcohol-infused, my sidekick, Greg, crept softly over to my desk and announced confidentially:

In slow motion I roused out of my stupor, and looked over my shoulder preparing to fire back:

Standing before me my right-hand-and-left-middle-finger-man proudly displayed the thick coating of dark orange glue saturating a sheet of mesh-mounted mosaic. 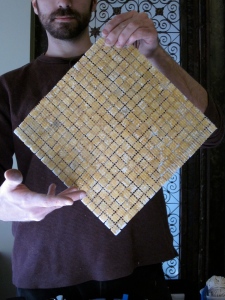 I tuned out their discussion but Elsbeth followed Greg back into the sleepy minion pit merrily announcing:

My leader stood before my desk, eagerly awaiting my vote, but I lacked the energy to feign agreement.  I didn’t buy that copy, either, and frowned.  The cheer drained from The Boss’s face.

Deflated, The Boss returned to her office.  I dropped my head atop my keyboard’s space bar while impersonating the hum of a weed whacker until quitting time.  Then I regained full consciousness, ambled my way down to the uptown express train fleet of foot, but made sure that the spring in my step did not catapult me into the track’s third rail.

This entry was posted in Humor and tagged boredom, office. Bookmark the permalink.