On a chilly late Saturday afternoon, I was standing inside the entrance of Whole Foods in Union Square, waiting for Albee.  To kill time I photographed the wall of All Natural Tortilla Chips in olive flavor and then I turned my camera’s attention towards the opposite side wall of Darling Clementines. 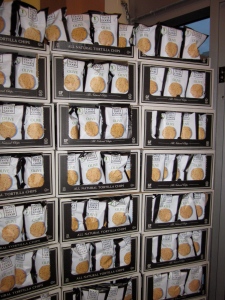 Before I could attain a properly lit shot of this apparently forbidden fruit, Bored Security Guard, a woman half my age and twice my size, begins yelling at me:

Bored Security Guard:  What are you doing?

Me:  I’m photographing the clementines.

Bored Security Guard:  You can’t do that!

Albee enters mid-commotion.  The Bored Security Guard is stumped, not wanting to admit that shoplifting is slow and she’s itching for something to do which is why she has zeroed in on innocuous me.

Albee: We’re with the FDA.

That quip instantly thwarts any possibility of me facing further harassment and frees us to proceed with our actual mission – sampling the zeppole at Led Zeppole on East 14th Street between 1st and 2nd Avenues. 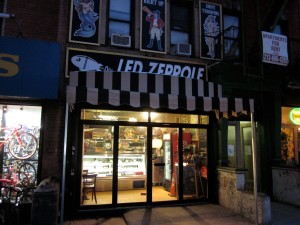 After dining at Francis Ford Coppola’s restaurant, Rustic, last month where I had excellent zeppole for dessert, I wanted another fix of this Italian delicacy, but I was unsure where I might find it in Manhattan since winter is not synonymous with street-food season.  A quick Google search took me to Led Zeppole’s site.  I forwarded the link to dessert-lover Albee who was immediately on board for a fix of fried dough, too.

The shop is a minimally decorated simple storefront, with a modest array of desserts on display in a case.  Interior Design magazine will never publish a feature on this shop unless they do a story on how best to present product in an effort to lose customers. 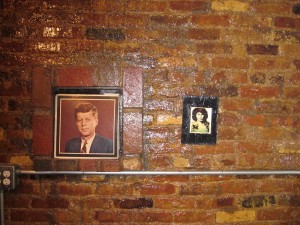 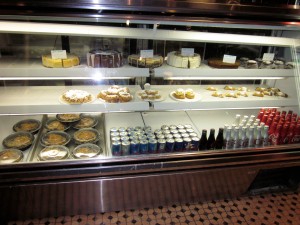 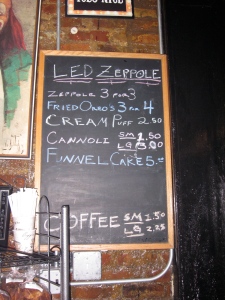 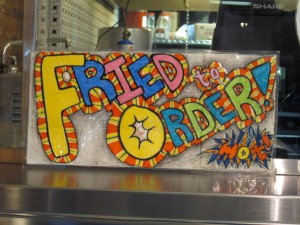 I asked the friendly chap behind the counter about the zeppole and he said he’d have a fresh batch made “in two minutes.”   Within minutes, this man of his word gives us a bag with three piping hot, powder sugar-smothered zeppole that proved very satisfying – crispy on the outside, doughy within, and not greasy at all.  Yet, as soon as we bit into these treats the fronts of our black winter jackets were so heavily dusted with powdered sugar, to the unassuming observer we surely appeared to be two graduates of the Tony Montana School of Cocaine Addiction. 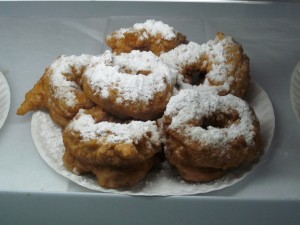 The star attraction zeppole on display, but the delectable fresh fare is smothered in powdered sugar. 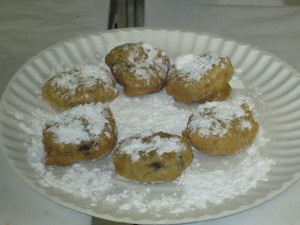 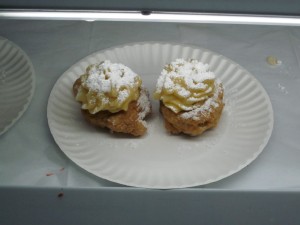 For those that are not lactose intolerant, these cream puffs rate a thumbs up, too.

I asked Albee if he wanted the third one, but he also had a slice of the carrot cake. 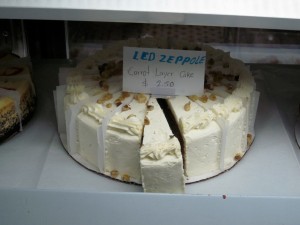 Although I could have easily stuffed myself with a second zeppole, I resisted.  As good as these zeppole are, one is excellent, two is pushing it, and eating three in one sitting is a one-way ticket to the Land of the Third Butt Cheek, a place I intend to never visit.  Yet, for $3 for a bag, this is a very sweet deal to share with friends.  We’ll be back, but I’ll make sure to avoid Whole Paycheck up the street on my way over. 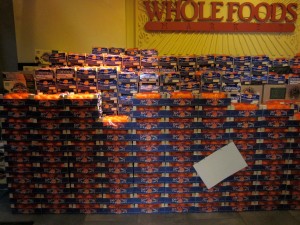