Most of the time the answer to that question is not to read unless it’s The New Yorker, The New York Times, or New York Magazine but when I’m in the mood for horror, I chuck my all-things New York fixation and scan the sodium content on a food label.  The one time I do read an actual book is when I’m on a plane, especially when the flight is of significant duration.   Soon, I will be embarking on my annual holiday visit to my family on the West Coast, the perfect time to devour a novel.

Before I can board the plane I have to endure my first TSA pat-down; something I dread.  Greg, my sidekick, will be departing Gotham City for St. Louis this evening.  He has a very laissez-faire “go ahead, tug it” attitude.  What is my right-hand man thinking, that he’s going to be dry-humped by a lingerie model?  Men are patted down by men, and women by women.  I highly doubt that my super straight buddy is going to get a charge when he finds himself molested by the second coming of Grandpa Munster.

"Let me give you a hand with that, Greg."

As for me, a woman whose pendulum swings in the direction of her own kind, I welcome being groped by a member of my own tribe.  I’m a veteran in both the giving and getting in this area, but usually under ideal lighting conditions, with music and so much alcohol soaking my brain, even Rin Tin Tin’s mother, who I dated briefly in high school, resembles Gisele Bundchen.  Tomorrow, I envision being brutally felt up by Kirstie Alley’s look-alike spewing garlic breath as she’s suffering raging PMS.  If after surviving that trauma, my flight is subject to the insult of a terrorist attack, my final thoughts following a negotiation with the God I’ve resisted believing in my entire adult life (“please don’t sentence me to roasting on a crowded New York City subway platform in July for eternity”), will be, “The last woman that laid a hand on me was the direct descendant of a rhinoceros and now I’m gonna die.  This sucks.”

Assuming that I survive both the pat-down and my flight, there remains the question of what to read?  Recently, when I returned home from work, someone in my brownstone left a book atop a pillar on the staircase landing.  I wondered, “Hm, finders, keepers?”

The reading material of a Mensa reject.

Quickly, I realized that this tenant mistook the landing for the trashcan.  I brought the book to my building’s vestibule where it rotted for a few days until it disappeared into another tenant’s apartment or was reduced to mulch.

In recent years, I have been making an effort to read the novel that has won the Pulitzer.  My avid-reader boss, Elsbeth, introduced me to this habit when she loaned me her copy of Middlesex by Jeffrey Eugenides.  My Lord and Master said:

Elsbeth:  This is an odd, very intelligent story; you’ll like it.

She was right.  Another year she gave me Interpreter of Maladies by Jhumpa Lihari, but then I committed the faux pas of requesting the graphic novel, Persepolis.  My boss gasped, “You want that cartoon book?”  The next year I was gifted with a sweater.

For some time I have wanted to read Michael Chabon’s The Amazing Adventures of Kavalier & Clay, but it’s 656 pages long and I prefer to travel light, so I have decided to go with 2010’s prize-winning slender tome, Tinkers, the first novel by Paul Harding.

Over beverages in B Bar on the Bowery, I told Milton that I was going to read Tinkers on my flight.

Milton:  That’s such a beautifully written book!  I couldn’t get past page three.

I stared at my dearest friend in astonishment.

Milton sips his Margarita in screaming silence, delivering his droll “you should have asked” look in my direction.  The next time I fly West, I’ll ask him if he has Kavalier & Clay in his library. 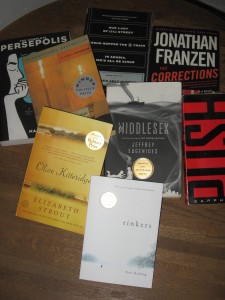 A pile of plane reading.