Although I do not possess an ounce of elite, or even sub-par athleticism in my DNA, if ruminating were a sport, I would be on that varsity squad.  For several months, I have been thinking about getting back in shape.  For several years, I used to work out six mornings a week riding my exercise bike and lifting free weights for a combined total of 45 minutes.  Therefore, I was quite lean and fairly fit.  I cut back on that masochism when I started my current job as Minister of Tile, but I continued my workouts for at least four or five times a week.  When the economy tanked, and my pay was slashed forcing me to live low on the hog, I started writing more, staying up late and exercising less.

All summer I promised myself I would start riding and lifting again, but this past summer was so brutally hot, I was certain that extreme exertion could result in a heart attack, or at the very least some excruciating stiffness.  Now that the weather has cooled considerably, my new excuse for avoiding exercising is that my terrycloth headband is loose.  Naturally, my first thought was how did I manage to lose weight in my head?  Then, a fear shot through me; do I have osteoporosis of the skull?  I examined my headband and diagnosed that it was simply stretched and I needed a new one.

Recently, a Modell’s sporting goods store opened on Amsterdam Avenue.  As I was walking up the street towards Amsterdam, my D-cup nose inhaled the decadent aroma of something freshly baked with chocolate.  This sensual smell was emanating from the Levain Bakery over on 74th and Amsterdam and I knew that another batch of their giant 6-ounce chocolate chip walnut cookies had just emerged from their ovens.  A hot and gooey Levain cookie fresh out of the oven is one of life’s greatest indulgences.

With my spastically sniffing nose trying to pull my entire body into the Levain, I reminded myself that the sole reason I have yet to look like a full replica of the Liberty Bell is because I avoid that bakery, and must continue to steer clear of it until I resume working out.

Therefore, I made a beeline for Modell’s.  I enter the store where I am greeted by a six-year-old, Tilda, the friendliest rescue Schnauzer on the Upper West Side.  She stands on her hind legs, wraps her paws around my thigh (no, she’s not a humper), looks up at me and says, “Pet me!  Are you blind to how cute I am?” 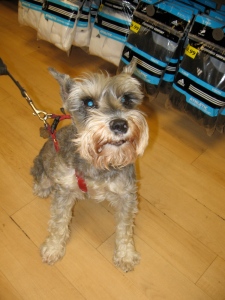 With gusto, I pet Tilda around and over the ears and under the beard beneath her jowls.  She basks in the attention and I love giving it to her.  Julie, her caregiver, tells me that she named her people magnet after Tilda Swinton, an actress she loves.  I tell Julie that I’m also a big Tilda Swinton fan and I add that I have just seen the stage adaptation of Orlando.  Julie is a big fan of that film.  Meanwhile, Tilda the Schnauzer, asks, “Are you going to pet me more or what?”   Since she is also a hypoallergenic breed, that does not activate my allergies in the least, I comply.

Julie tells me that she adopted Tilda from Biscuits and Bath five years ago when she was around one-years-old.   Her favorite hobbies are eating and lying on a pillow in front of the fan.  I think, “Wow, she’s just like me!”  As other customers enter the store, Tilda give a little howl that almost sounds like, “Hellooooooo!”

Once Julie and Tilda depart, I find the selection of terrycloth headbands, but the joy rapidly drains from this visit.  All of the headbands they have are decorated with logos for either Nike or Adidas.  Since I am endorsement-averse I ask a clerk if they have any plain headbands but he says no.  The clerk working the register suggests, “Turn it inside out.”  Inside out, there will be an unsightly seam showing while the pressure from the logo will leave my forehead embossed with either a Nike or Adidas logo.  I ride the subway.  I don’t want anyone staring at my forehead.   I leave still headband-less and flabby, but content that I at least had a spontaneous fix of adorable dog petting.