Lame Adventure 89: The Breast of the Matter

After swearing to myself that I would never pay more than $2.99 for a pint of blueberries, when I am out running errands, what do I do but pay $3.49 at Westside Market for a pint of one of my favorite summertime fruits as the season winds down and the price ratchets up.  Apparently, I’ve personally scarfed every locally grown blueberry in the Tri-state area and they’re now being imported from Canada.  I leave the market grumbling when I am distracted by this thought provoking sign pictured below.

Start spreading the word -- or cream.

A weasel-sized middle-aged fellow found this sign and another more explicit one so titillating, he was describing both in vivid detail to someone on his cell phone, possibly a fellow middle aged anti-Adonis.  I flashed my all-seeing hairy eyeball Excitable Middle-aged Boy’s way.  This prompted him to tone down his exhilaration as he flashbacked on the threats of blindness his mother regaled him with in response to his constant self-servicing to the pile of sticky girly magazines stashed under his bed. 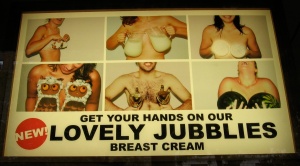 What I found most interesting about the sign featuring the six models was the inclusion of a pale, scrawny, hairy male and the exclusion of any women of color.  What’s that about?  Not to get too Robert De Niro about this, but the pasty white women selected looked rather fugly to me.  In fairness I suppose in that harsh lighting, even Salma Hayek would look more “eh” than “ah,” a feat that would normally seem impossible.  Although the pale, scrawny, hairy guy is hopeless, and should definitely be replaced by at least one woman of color, possibly all of the women, if lit with freshman year film school level artistry, would look great.

Once home I went online and checked out what Lush brand Lovely Jubblies Breast Cream is about.  The first thing I noticed was the cringe inducing tag line, “Keep your knockers in tit top shape.”  Apparently, the purpose of this “brilliant” breast cream is to avoid the fate of Marlon Brando’s abundantly endowed companion, played by the abundantly endowed Maria Schneider, in Last Tango in Paris, who he predicts, “In ten years, you’ll be playing soccer with your tits.”  Now, thirty-eight years after that film’s release, she’s closing in on sixty.  Therefore, she might be pushing her monumental rack around in a wheelbarrow today.

Lush hails this product as being “packed full of tightening meadowsweet infusion and firming tiger lily petals to help your girls fight the forces of gravity.”  In addition, this magic elixir will “leave your cleavage smelling like a fresh floral bouquet of orange blossom, rose, jasmine and ylang ylang.”  After reading that, I sneezed.

Back in the Eighties, there was a jewelry boutique on Columbus Avenue called Ylang Ylang.  I once mistakenly referred to it, after imbibing a supertanker of cheer, as Duran Duran.  The real name for Ylang-ylang is the slightly more pedantic sounding, Cananga odorata.  Cananga odorata is a tree that produces an essential oil, as opposed to a nonessential oil, such as the grease on my face, from a flower that is used in aromatherapy.

Lush encourages users of Lovely Jubblies Breast Cream to “smooth a generous amount” on presumably their breasts, but then they coyly refer to where it should be applied as the more generic sounding “wobbly bits.”  Does this mean that when my D-cup sized nose starts showing signs of sag, I could apply it there?  This cream is available in 3.5-ounce jars to the tune of $24.95.

I’m confident that my ironing board replica breasts, and possibly even my well hung nose, will all remain perky and firm even when entering the crematorium.  It’s the stroke I’ll surely suffer if I were to shell out such a ridiculous sum of money for a product that is one part marketing and two parts sham – a part sham for each of my “girls” – that would kill me before gravity has a chance at having its way over here.  The thought occurred that if I smeared my breasts with smashed blueberries, it might yield a similar result; aside from a telltale purple stain I would prefer to live without.