Lame Adventure 80: For the Birds

In my next life, I want to be a bird, specifically a New York City based pigeon.  Some might scoff, “Why in the world would you want to come back as a rat with wings?”  Please note that “rat with wings” is a name for our feathered nemeses Woody Allen coined in 1980 in Stardust Memories when perchance, actually per script, a pigeon flew into his apartment via an open window.  Just another typical bit of forgotten WA-style urban neurosis, but that phrase has deservedly entered the lexicon.

I want to return as a pigeon in the Big Apple because there’s always plenty to eat lying around, there are millions of other birds so I’ll never be without a date, I can roost rent-free in the toniest neighborhoods, flying beats riding public transportation, and best of all, I can crap wherever and whenever I want, including on annoying New Yorkers like the short, fleshy young woman in her early to mid twenties that I noticed on my way home from work Monday evening as I walked up Broadway in the West 70s.

"Hurry up, take your picture. It's been almost a minute since I last ate. Hey! Do you have a pretzel on you? I'm in the mood for one."

The street was crowded with rush hour pedestrian traffic, as well as vendors selling their wares lining one side and the jazz musician I see every weeknight playing his saxophone on the other.  A tall, slender bun-head, fresh from ballet class, wearing iPod headphones, who was about the same age as the short squat woman – a woman that bore a distinct resemblance to the fruit of an illicit romance between a fire hydrant and a table leg, brushed against each other.  Fireworks exploded.

Short Squat One:  You bumped into my bag!  Don’t you know how to say ‘excuse me’?

Short Squat One:  You’re so retarded!  Forget it!

Short Squat One furiously stomps on as Bun-head stands bewildered asking, “What’s her problem?” If I were Lame Adventures Pigeon, I would have dive-bombed SSQ’s head with my Mickey D-bagel-pizza-Dunkin’ Donuts lunch.  Pigeons have the power.

A bit powerless here but ... 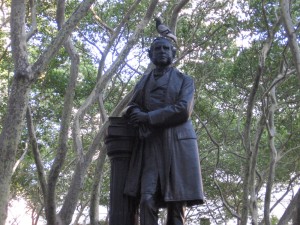