It was my favorite time of the workday, quitting time.  I enter the office of my boss, Elsbeth, to say goodnight, when I notice she is hunched over her desk at a peculiar angle.  In the almost six years I have been this woman’s dedicated Middle Finger Assistant, I have familiarized myself with her quirks quite well.  Therefore, I have a pretty good read on most Elsbethian situations. I instinctively know that something is averse.

Elsbeth:  Look at my ceiling.

I look up and see an appalling protrusion that bears the distinct resemblance to an adolescent girl’s breast but with a weeping nipple.  I don’t know whether to vomit, put a bra on it, or photograph it. She’s positioned a tall garbage can under the leak to catch the rust color drip.

Me:  I don’t like the looks of that, Boss.  I don’t think sitting under that’s such a good idea.

Me: “Don’t worry about me.  I’ll be fine.” What are you, the ultimate Jewish mother?  Elsbeth, your ceiling might cave in!

My colleague, The Quiet Man, jets into Elsbeth’s office as if transported on Acme brand spring shoes.

The Quiet Man:  What’s going on?

Me:  Look at her ceiling.

The Quiet Man looks up and gasps.

The Quiet Man:  Elsbeth, how long has it been like this?

Elsbeth: For the past hour or so.  I made a call.  They’ll look at it tomorrow.

I leave, enter our warehouse and bark at my sidekick, Greg.

Me:  Greg, get in here and bring plastic sheeting!

Greg comes empty handed, reinforcing my impression that my supervisory skills leave something to be desired such as a scintilla of effectiveness.

Me:  Elsbeth’s ceiling is growing a breast.

Me (confidentially):  I’m dying to photograph it.

Greg (confidentially back):  Hold off until tomorrow.

Translation, “Control yourself until she’s not around.”  Greg walks ahead of me.

Me (muttering):  Do you think it could look like the Planetarium dome by then?

I follow Greg into Elsbeth’s office.  He looks up.  His eyeballs pop out of his head.  The boys decide they’re going to investigate what’s leaking on the floor above us.

Elsbeth:  Can you do that?

Considering that the The Quiet Man has the intellectual capacity to build a space ship from a paperclip and Greg is an audio engineer, I have complete confidence that these two giant underemployed brains can find a busted pipe.  Two minutes later The Quiet Man returns.  They have discovered the source.  He claims it’s an “easy” repair, but all Elsbeth hears is the word “copper” and equates that with expensive in her mind.  Meanwhile, Greg remains on the floor above us positioning a steel drum the size of Omaha over the source of the leak to stave off seepage.

Elsbeth:  It’s so nice that our guys would do this for me.

Me:  “Nice.”  We all have visions of standing on the unemployment line if anything happens to you.

Elsbeth:  Nothing’s going to happen to me.

Greg returns.  I give him the eyeball shove so he holds off entering Elsbeth’s office.  I walk over to him.  We speak sotto voce as if we’re bit players with under five lines in The Godfather.

Me:  Am I crazy?  I think she should get out from under there.

Greg:  Use a scare tactic.  Mention the mice in the ceiling. 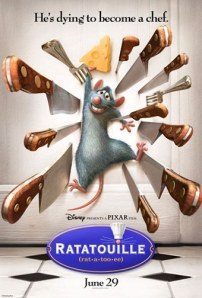 Me:  You know, Boss, if your ceiling opens up, think of all the mice that could come pouring out.  You don’t want to be around for that.  Oh no, you don’t!

Elsbeth:  I can’t imagine that would happen.

That’s because Elsbeth did not see Ratatouille.  It was now 5:45.  The company closes at 6:00, so I figured the worse that could happen is that her ceiling could buckle and fall after she leaves.  Therefore, I said the last thing on my mind.

Me:  Can I take some pictures of this for my blog? 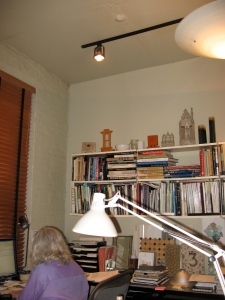 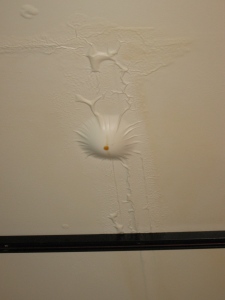 This entry was posted in Humor and tagged ceiling, leak, office, ratatouille, tumor. Bookmark the permalink.