Since today is Memorial Day and I do not have to be at work (yea!) I decided to log onto the Museum of Modern Art’s live feed of the final day of performance artist Marina Abramovic epically sitting in the museum’s atrium.  I figured something interesting might happen and I figured right.  Barely thirty minutes into the first hour, a svelt young Karen Finley wannabe appeared.  She approached Marina clad in what looked like a simple cotton shift, immediately lifted her dress revealing her nude body and the museum’s guards from possibly every corner and floor of the building descended instantly ending the presence of the naked woman with the artist. 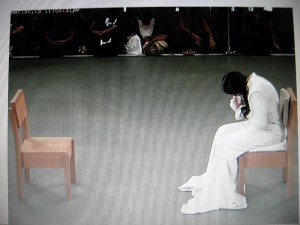 Marina waiting for her next guest and blowing her nose proving that allergy season affects everyone.

"What'd I do wrong?!" Hogging the spotlight? 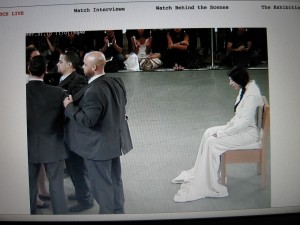 "My job is to open my jacket in instances like this." 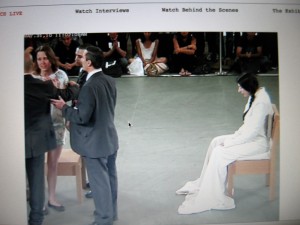 "You guys are so overreacting! Everyone's naked on the sixth floor!"

"Hey, look at my authority! I can open my jacket, too!"

The Abramovic endurance test sitting performance has ended.  She has achieved her goal of sitting more than 700 hours staring across at over one thousand sitters.  MOMA’s guards continued to be extra vigilant following the aforementioned stripping incident, but I only noticed one other young woman who had the potential to set them off.   She was clad in a dual purpose lavender color skeleton suit – perfect to wear when sitting across from Marina Abramovic or when scuba diving.  It might also make a good method of birth control if inclined to turn off one’s mate.  This woman seemed rather emotional and I do not think it was due to any feelings of embarrassment. 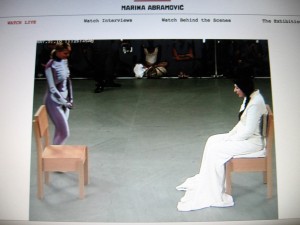 "It's laundry day, this is all I have to wear." 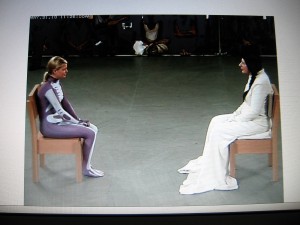 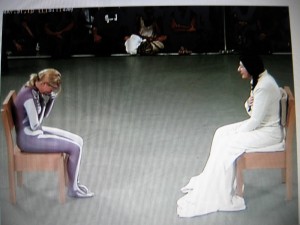 A sitter nearing the end of the piece was an ersatz Marina doppelganger, but in male.  The guards hovered in the background no doubt ready to make creamed corn out of him should he attempt any funny business.  He didn’t.

"Move on before we move you on."

Around 4:30 an army of guards arrived and I wondered, “Hm, is Obama gonna take a seat?”  Not quite, but this Buddhist monk, the Dalai Lama, or the Dalai Lama’s body double showed up.  He roused Marina’s attention.

After about ten minutes or so even his serene presence did not stop the guards from whispering something like, “Time’s up, pal; move on,” in his ear. 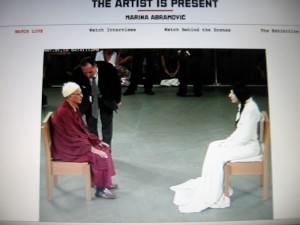 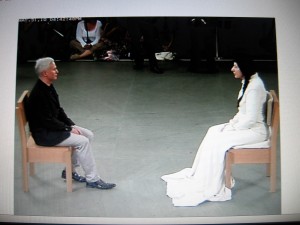 Klaus, the final sitter, and Marina. 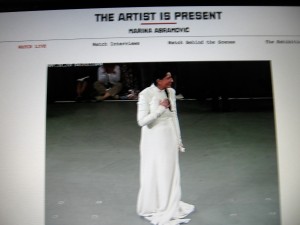 "Thanks for watching. Exit through the gift shop."

Marina surrounded by the performers who recreated her performances.

The Artist is No Longer Present.

3 responses to “Lame Adventure 55: Go to MOMA, Get Arrested”