If sneezing were an occupation, I would have a career, or maybe even find myself CEO of a multinational corporation, one called Sneezers, Inc.  It was Friday night, Milton and I had tickets to see our close mutual friend, Albee, star as Vincent Cradeau, the coward sent to hell, in an Off-Off-Broadway staging of Jean-Paul Sartre’s existential masterpiece No Exit.  The basement theater, 13th Street Repertory, was a tad musty. 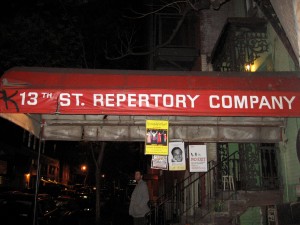 As soon as the lights dimmed, I suffered an allergy attack, started sneezing, and managed to sneeze my way through the entirety of this very entertaining ninety-minute play.  When I am at home or at work, I generally sneeze with hurricane force, but in this intimate setting, I stifle my sneezes for fear of shattering the cast’s concentration, as well as distracting my fellow theatergoers.  Afterward, Milton assures me that my incessant sneezing was “remarkably quiet, I barely heard you.  I’m certain no one on stage did, either.”  Albee later told us that the only distraction he suffered was minor, seeing his father dozing in the third row.  If my father attended, I doubt that he would have fallen asleep, but I am sure he would have asked many questions:

Dad:  Where the hell were they supposed to be, hell?

Dad:  So they were just driving each other nuts for eternity?

Me:  Yeah.  Sartre’s most famous quote is from this play, “Hell is other people.”

Although this was minimalist staging, and the first production by this new theater company, Marble Bath Productions, when great writing meets talented acting and inspired directing, it’s theater that works well.  It will be very interesting to see what MBP stages next.  In addition, all of the proceeds from this initial production benefited Haiti.  This prompted Milton to remark, “Haiti now has more of my money than I do.”

A possible side effect of having 327 sneezes implode inside my head over the course of ninety minutes, I wake with a significant headache Saturday morning.  I pop a fistful of high-octane head pain reliever, and just as the pain begins to lift, I hear rustling and jangling outside my window.  Constantine, my next-door neighbor (see Lame Adventure 3: Neighbor and Muffin ), is in the process of hanging wind chimes.  Who the hell hangs wind chimes in New York City?  You hang wind chimes in the country, places with space and soft warm breezes, not cramped urban places rife with airborne soot.  Furthermore, why not hang these wind chimes in one of his other windows, such as the one not facing my bed, and in essence, my aching head?  Now I am feeling beaten in the brains with tubular bells.

I consider raising a fuss about this, but it’s not like he has a belching bagpipe or a screaming car alarm sitting in the windowsill.  Therefore, I decide that getting dramatic about this is rather petty on my part, and besides, my headache has subsided.  I go out and take a walk, burn off some steam.  When I return, I see Constantine leaving our building.

Constantine:  Hi, how are you?

Me (thinking):  Woke with a brain tumor, my neck is always stiff, I can’t stop sneezing, I suffer constant dry eye, and I hate your wind chimes.  Hell is other people.

Constantine:  My sister in Greece got me a belated birthday present, wind chimes! They sound so soothing!  I hung them between our windows so you can hear them, too.

If I strangle him, would this be called neighborcide?

Me:  Oh, you shouldn’t have.  You’re just too thoughtful.

I enter my apartment, glare at the chimes and sneeze voluminously.  They tinkle.

My source of force-fed mellow.