A few weeks ago, I received the 2010 Census form.  This is the third time in my life that I have completed this form.  It probably took me longer to lick the envelope closed than to fill in my information.  I had dry mouth and I feared getting a paper cut on my tongue, so I had to stop and crack open a bottle of water.  When I finished, I checked my email.

My sister, Dovima, who resides in the San Francisco Bay Area, had sent me an email with the subject heading “census.”  Dovima is seven years my senior, so this is the fourth time she’s filled out one of these forms.  Dovima has just recalled that our great-grandparents on our mother’s side immigrated to the US from Spain during Grover Cleveland’s administration.  She has calculated that we’re a quarter Spanish, and wants to know if I checked the box indicating that I’m of Spanish origin?

Although I am good friends with an authentic Spaniard, Lola, and I have seen countless Pedro Almodovar films, it has never occurred to me that I am Spanish.  Our mother was not someone spewing Spanish pride.  When I signed up to take Spanish in high school, this disciple of Jacqueline Kennedy-Onassis made my advisor change my language class to French.  Mom’s reasoning, “When you go to a French restaurant, you’ll want to know how to read the menu.”  The last time I ate in a French restaurant, it was a grab and go place where I ordered a croissant.  I did not need four years of negative c study to figure that one out.  But I digress, back to Dovima, her census confusion, and Question 8, “Is Person 1 of Hispanic, Latino or Spanish origin?” that has been asked for forty years.  Why did Dovima just notice it in 2010?  This strikes me as odd.

I take a deep puff on my Sherlock Holmes pipe, and brood.  I conclude that my 15-year-old niece, Sweetpea, the family instigator, gave her text messaging thumbs a rest, read the census form first, and then dissected our ancestry to within a molecule of our DNA.  This achieved the desired result — baffling her mother.  I am certain that while Dovima was emailing me, Sweetpea was back on the couch with her feet propped up on the coffee table texting a member of her posse: “my mom’s emailing my aunt in ny 2 find out if we’re spanish. lol!”

Therefore, I’m compelled to go easy on my sibling.  I email her, “I don’t think much about our great-grandparents being Spanish, but I recall that our great-grandmother was Jewish.  No wonder I was a Catholic school failure.  I hope you’ve been eating matzo.  I prefer the dark chocolate variety.”

Dovima just turned ickity-eight on April 1st, and now I’m suffering some anxiety over the gift I sent her, an 8 ounce can of Solo almond paste (the real deal for bakers that don’t clown around when it comes to almond paste).   What else could I get my sister who was born on April Fool’s Day?  She told me not to go overboard, and I listened.  I wanted to get her something original, something I was certain she’d never think to get herself, and something economical (okay, cheap).  Fortunately, Dovima’s not the type who would boomerang this present off my head, either.  She will appreciate it, especially since she has often lamented the Odense brand of almond paste that’s in her grocery store.  Dovima’s recipes require 8 ounces of paste.  The Odense tube is only 7 ounces, and it costs a king’s ransom.  This infuriates my sister, and it does make one wonder if there is an almond paste conspiracy out there.  Solo is not in many stores, but one near me just happens to have it, possibly because much of my neighborhood thinks like I do — any takeout within a three block radius is home cooking.

Dovima is a very considerate person overall.  The other night I had a dream that Sweetpea had a twin.  It mortified me to think that I had neglected Carbon Copy Sweetpea for 15 years.  Dreamland Dovima was her usual magnanimous self and insisted, “It’s okay.”  I email Dovima about this dream and ask, “What the hell was that about?”  She responds, “You won’t believe this but on Sunday Sweetpea asked me if she has a twin.  Now you are dreaming about her having a twin.  WTF is going on???  I was awake giving birth and only delivered one baby, so I have no idea who delivered her ‘twin’!”  Since I’ve had almond paste on the brain, in my dream Sweetpea’s twin was called Solo. 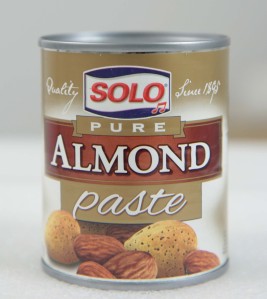 The real deal, a dream birthday gift, but an odd kid name.

This entry was posted in Humor and tagged census, solo almond paste. Bookmark the permalink.