Lame Adventure 6: The Hole in My Head

Flush with the windfall from our Federal tax returns, Milton and I take it upon ourselves to personally lift the sagging economy.  He promptly purchases a 42” flat screen LG TV and a Sony Playstation 3.  My cash inflow is a shade less than his so I splurge on a new shower curtain liner and a quart of Pequa drain opener.

My bathroom’s drain is slow, but I have not replaced my bottle of Pequa since I last used it a year or two ago.  Many years back, a plumber named Luis who used to service my building, advised me to always have a bottle of Pequa in my home.  He was very persuasive when he said, “This shit works.”  I like to think that there is no link between Pequa and his death from cancer a year later at age 34.

Certain that I will forget Pequa because I tend to think of it more as “the shit that works” than its plumbing industry name, I have kept the empty bottle under my bathroom sink since I finished it.  I could have tossed the bottle into the trash and written Pequa’s name on a post-it and stuck that post-it to the inside of a cabinet, but that seems like too much hassle.  It’s easier to keep the empty bottle under the sink for a year or two since that is exactly where its replacement will go.

Before venturing out to my local hardware store I bundle up because it’s 27 degrees today.  Yet, it’s not the layers of clothing I don that takes so much time, it’s making sure that I pack my two digital cameras (one a Flip video), my cell phone, a pen and pocket notebook (can never predict when inspiration might strike), two lip balms (trying to get in the habit of carrying a spare), keys, wallet, and a copious stash of tissues since my nose runs like a faucet in the cold.  Every pocket of my jacket is now bulging.  When I glance at myself in the mirror, it appears that I’ve transformed into a nursing terrier with several swollen breasts. 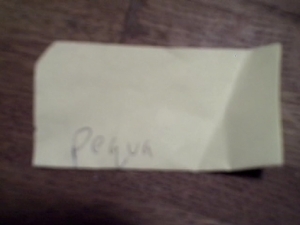 Beacon is a family-owned and operated small business that has been on Amsterdam Avenue since 1940.  They’re my go-to hardware store since their prices are not as extortionist as their competition.  I never feel like I have to barter a kidney when I buy a replacement bulb for my refrigerator or a scrub brush for my grill pan from Beacon.  I also like being loyal to the little guy.

Entering Beacon is like entering Mayberry.  It’s such a time machine when you open the door, a bell clangs, and Bru, a mellow Labrador Retriever, is the official greeter, but today, he’s apparently not on duty.

Instead, I see John, who immediately asks me if I need help.  That’s a loaded question in general, but I tell him, “Possibly in a moment.”

I’m still determined to remember the name Pequa on my own.  Therefore, I head over to the shower curtain liner shelf, grateful that I still have the capacity to recall that I need a shower curtain liner.  After locating a liner in my favorite color next to black, clear, I accept reality that this attempt to recall the name Pequa is hopeless.  I grab a liner and head over to John.  I am so flustered at my inability to remember Pequa, I become inarticulate when I approach him.

John:  So what else do you need?

I pause pregnantly not wanting to say what I’m thinking, “The shit that works.”

Yes, I blanked on the word drain at that pivotal moment.

John walks over to a high shelf, and I follow him.  He reaches up, removes a bottle and hands me a quart of Pequa.  The package looks almost identical to the one I last bought during the second term of the Clinton administration.  I immediately look at the price, $7.99.

I pause resisting the urge to sound impolite and say “shit.”  Psychic John comes to my rescue again.

Me: Yeah, this stuff works. 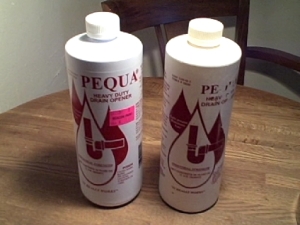 This entry was posted in Humor and tagged Beacon Hardware, Pequa, Sony Playstation 3. Bookmark the permalink.

32 responses to “Lame Adventure 6: The Hole in My Head”