I was running errands on the Upper West Side.  Everywhere I looked I encountered piles of discarded Christmas trees heaped on the sidewalk waiting for the trash collector, another post-holiday Gotham City tradition that is not as exalted as when those same trees were standing tall and fresh or when they were clad in traditional tree-drag.

Battalion of trees at 72nd and Broadway 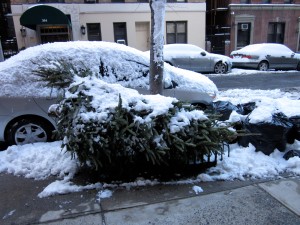 That afternoon, they were simply reduced to piles of tree corpses that were of no further use to their owners.  Most New York City apartments are tight on space, so the average resident is not going to be inclined to compost his or her tree.  Last week, I tried a new Trader Joe’s cereal containing a key ingredient that could have been mulch.  I gave it to my sidekick, Greg.

Bark in a box.

At the risk of encountering the wrath of The New Yorker and a beating from the angry ghosts of Harold Ross, William Shawn, and their current fire-breathing legal department, pictured below is one of their more profound cartoons by Jack Ziegler that perfectly captures the post-holiday spirit.

Another New York City tradition, dumping trees in any available trash can.

This cartoon is also available as a holiday card on their The New Yorker Store web site.

Some years back I had a next-door neighbor that kept her over-sized holiday wreath hanging outside her door for six months.  By February, it was shedding needles so profusely I had to sweep my apartment’s entryway every time I entered.  By April I was practically vacuuming hourly.  Possibly, every time she entered her apartment, she was blind to the shower of needles forever falling.  Maybe this wreath had some sentimental, or more likely, mental symbolism.  I recall that she worked for Lord & Taylor, or Ann Taylor, or maybe she was a tailor.  She did not strike me as a tree hugger-type.  Several times, I considered politely asking her to “please take that eye-sore the hell down,” but it was her wreath, her door, and it was not as if she was hanging a giant holiday fruitcake that had attracted every fly on earth.

Finally, one day in June while I was home indulging my favorite hobby, procrastinating,  I heard a thunk outside our respective sanctum sanctorums.  We simultaneously opened our doors to find her wreath collapsed in a heap on the floor.

Me (thinking to myself):  Oh happy day!

Me:  Old age or suicide.

Neighbor:  Do you think I should take it down?

Me:  Or piece it back together.  I have a mini pine forest in my vacuum cleaner that I can pass onto you.  Christmas is barely six months away!

She got the message and threw it out.

I was at work sitting at my desk doing the unlikely, concentrating on something work-related although I now have zero recollection about what that was, when Greg, my sidekick said:

Greg:  The Boss is dead.

Me:  Don’t be ridiculous.  She’s in her office right now with nothing more than a mild red wine hangover.

Since I am a Yankees fan, I did feel a twinge of sadness, but I was also aware that he was elderly and ill, so I was neither surprised nor prostrate with grief.  I did find the timing symbolic that he bought his rainbow on the day of the All-Star game.  Yankee-haters must have been delighted to hear broadcaster Joe Buck announce at the All-Star game’s conclusion that it was dedicated to Steinbrenner, considering that it was coached by Yankee skipper Joe Girardi and the losing pitcher was Yankee Phil Hughes, giving the National League their first All-Star game win since 1996.  Had Hughes been the winning pitcher, the media spotlight would have burned even brighter considering the significance of this victory on this day distorting it into yet another Hallmark card-style tribute to The Boss.

I knew that Steinbrenner’s death would be a major news story since he was a colorful larger than life personality.  Jeopardy! was pre-empted for a half hour tribute special to him on WABC TV.  The New York Daily News published a special evening edition, something they last did when President Obama was inaugurated.  The New York Times will keep his obituary available on line for months.  Steinbrenner has already been praised all out of proportion to an exhausting degree.  Countless times I have heard about what a business genius he was for buying the Yankees for $8.7 million in 1973, but what’s $8.7 million worth in 2010 dollars?  According to the inflation calculator, that figure would be $44,206,030.59 in today’s dollars.  Not exactly chump change.  All-Star Game color commentator Tim McCarver claims that Steinbrenner invested $168,000 of his own money in the deal.  According to that same inflation calculator, that would be $853,633.69 in 2010 dollars.  Obviously Steinbrenner was in the right place at the right time when he made that investment.  The team’s estimated worth today is $1.5 billion.  To avert Steinbrenner’s threats to move the team, my tax dollars helped pay the billion dollars for the new Yankee Stadium, a sports palace with ticket prices so out of reach I have yet to attend a game.

Although it is considered impolite to speak ill of the dead, in death, Steinbrenner is walking on water with the media today.  His contribution to the Yankees was remarkable, and the franchise is extraordinary.  He restored this legendary sports team to the envy of the league, and the ire to the legions of Yankee-haters.   In response to this team’s winning, Steinbrenner got very, very rich.  He might have been good for the Yankees, but they returned the favor.  The buckets of money Steinbrenner made are between the lines in every story declaring him a terrific New Yorker, a wonderful Floridian, charitable beyond belief; basically a near-perfect human being, possibly God’s other son.  I am waiting for someone to suggest that Alexander Hamilton be given the boot so that Steinbrenner’s face can adorn the ten dollar bill.  This was what Ronald Reagan’s fans were hoping for while his corpse was still warm when he died in 2004.  Five days after Reagan bought his rainbow, Ray Charles followed his lead.  Appropriately, in response to the media frenzy following Reagan checking out, The New Yorker acknowledged the fortieth president’s passing with this inspired cover:

My dear friend and consummate Yankee-hater, Milton, finds the Steinbrenner love-fest stomach turning.  He thinks what is being worshipped is not a person at all but what this person represents, the great American dream i.e. phenomenal, unimaginable, unattainable (for almost all of us) wealth.  I think Milton has a very good point, and as for all of Steinbrenner’s charitable contributions?  He made zillions, why not give some of it away?  He turns on the TV, sees someone suffering, feels sorry for them and sends a check.  That’s the way it should be.  When people regain their senses about Steinbrenner Milton and I doubt that he’s going to be remembered as a great philanthropist.  He’ll be remembered as what he was in his heyday, the tyrannical Yankee owner with very deep pockets and a very short fuse, a guy that was obsessed with winning — not baseball’s Gandhi.

If we outlive Donald Trump, Milton is certain that the media will glorify his life story beyond belief, too.  That will be another good day to have a supply of Rolaids at the ready.