Lame Adventure 449: It’s the Most Familiar Time of the Year

Sixteen hours into January 1, 2015, my holiday season officially entered the ether and the most familiar time of the year resumed. This happened when I encountered my first asshat of the New Year: a chap about my age at my go-to supermarket, Fairway. Fairway is a place where, a few years earlier on another New Year’s Day, the toes of my right foot were nearly severed by a girl not much taller than a walking stick burning rubber on a scooter in the produce section. Apparently, that moppet, with parental approval, was training to compete in the Dakar Rally via the broccoli bin. My market could serve double duty all year round as the Asshat Convention Center of America, or ACCA for short.

Fast forward to the ACCA around 4pm on New Year’s Day 2015. I am patiently waiting my turn in a cue of fellow shoppers to grab a hand basket. The man in front of me takes his hand basket that contains some detritus left behind by previous users of that basket. There is a trashcan nearby at the store’s entrance, but Mr. Asshat upends the trash from his basket into mine.

Me: Was that necessary?

Mr. Asshat looks back at me and cringes, possibly flashbacking on his nagging mother. I swipe out the detritus and dump it in the trashcan he chose to ignore. Sufficiently humiliated, he mumbles an apology before scampering down an aisle in a failed effort to turn invisible. But, I appreciated his civility, unlike the last asshat I encountered in the Old Year: a woman half my age reeking attitude.

She crossed my path on another reliable source of suffering: the New York City subway system. This episode in the series, Meet the Asshat, occurred on my second-to-last train ride before embarking on a two-week hiatus from The Grind.

Ms. Asshat was sitting on the crowded 1 local during the morning rush hour with her legs crossed, determined to give anyone near her the boot.

Unlike Mr. Asshat in Fairway, my subway riding survival instinct warned that this was a Code Red Asshat, i.e., someone with the potential to detonate. Don’t provoke her. I got lucky and scored a seat allowing me to escape her foot follies. Everyone else near her came close to getting it in the shin. Her nasty expression screamed f-bomb. Fellow riders shared my cautious vibe and were mute around this volatile asshat. There are times when New Yorkers know to zip the lip.

Days later, I was in mellow mode visiting kith and kin in the San Francisco Bay Area. While in Sausalito with my best friend from college, BatPat, we strolled through a neighborhood of storybook-style houseboats docked on calm waters. 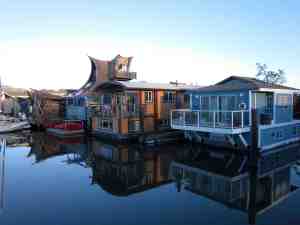 Many of these whimsical vessels belong to artists and writers. 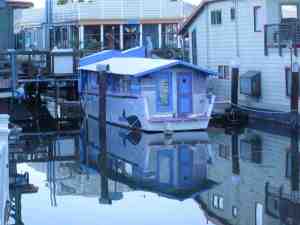 Tim Burton-esqe style houseboat from behind.

I flashed on ditching the steady stream of petty irritations that are such a key ingredient in big city life in exchange for the tranquility of a floating nest and the camaraderie of courteous neighbors with cool cats. 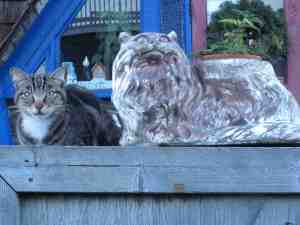 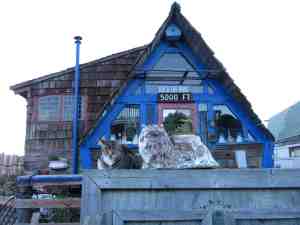 But whom am I kidding? Within a month, or an hour, my blunt force trauma temperament would surface and I could be the resident asshat in Shangri-la. 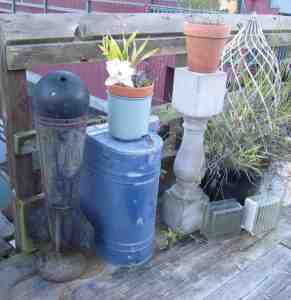 In front of my home, this bombshell might be active.

I am allergic to cats, I can’t swim and my astrological sign should be Seasick. I can do mellow by the shot glass, but my personality is frantic by the barrel.

The Neversail Ark: cool in principle but not for me.

Shortly after I returned from my California getaway, I was briskly walking down my block on Manhattan’s Upper West Side. It was five in the afternoon, a time of day that looks exactly like ten at night in winter, when I found myself doing a double take on what else? A sweating package identified as fresh chicken. 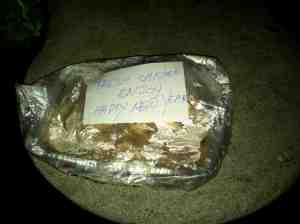 I don’t know what gave me the willies more: knowing that I reside in close proximity to a New York City asshat who re-gifts fowl, or later that evening, when I went out again and saw that there had been a taker. A few years ago, New York City was besieged with a bedbug epidemic. Have we graduated to salmonella sharing in 2015? Meanwhile, a New Year has dawned once again replete with a new crop of New York City asshats. The time of the year may no longer be the most wonderful, but it is certainly back to being the most familiar.

67 responses to “Lame Adventure 449: It’s the Most Familiar Time of the Year”