It is not a secret that I envy the pigeons that perch on the sill outside my window at The Grind. They fly wherever they want to go which sure beats riding the subway at rush hour. Here in New York, they always look well fed with all the free eats lying around. Often, I hear them cooing their birdbrains out indicating to me that they’re feeling pretty content. When they want privacy, they slip away to the air conditioner on the west side of the building and engage in pigeon-style tantric relations. This entails much wing flapping and flying feathers. I have also seen them lock beaks — pigeon-style kissing, which is an aspect of the mating ritual called billing here in the US and nebbing in the UK — for those of you inclined to read this site for its vast educational component.

On a recent Thursday, I noticed a pigeon huddled under the air conditioner in the building across from my office. My colleague, Godsend, is very aware of my bird watching.

Godsend: Are you looking at a pigeon?

Me: Yes, it doesn’t look good.

Godsend strained her neck for a look.

For hours, that pigeon was perched in that same spot, immobile. Every so often I’d check on it. My glutton for punishment pal would ask for a report.

Godsend: Is it still there?

Me: It’s still there and it’s still not moving. It might be dead and we might be spending the next three weeks watching it decay.

Later, I returned and it appeared to be gone.

Godsend: Do you see it?

Me: Wait a minute; it’s still there. The light was playing a trick on me.

The downbeat was audible from Godsend’s desk. It remained tucked under the air conditioner that entire day. The next day when we came in, it was actually gone. Godsend was massively relieved. 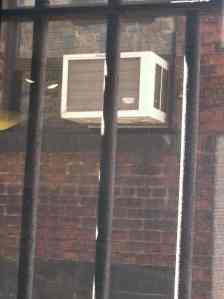 Godsend: See, it did fly away!

Me: I think it was dead all along and it fell off the ledge.

Me: Okay. Even if it did drop dead and fell off the ledge, at least we don’t have to watch it rot away for weeks on end.

Godsend remains convinced that it flew away. I am sure that it died. We cannot open our barred windows to stick our heads out to determine its fate, so fellow Lame Adventurers, as proven creative thinkers, what do you think happened to it?