Lame Adventure 384: For the Love of Cats

Even though I am a committed dog person who is deathly allergic to cats, I now have two critters of the feline persuasion prominently in my life over here on Manhattan’s Upper West Side. Pictured below is the sister act, Primo on the right, and her sibling, Segundo, on the left. It is evident that they both share my zest for sleeping. 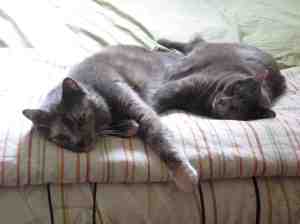 Their slave had committed the unthinkable: she had taken a two-day getaway to the Newport Folk Festival.

As someone well versed in giving the illusion of being a few I.Q. points higher than a Bonsai tree, that attribute convinced their serf to appoint me designated cat-sitter. I was paid handsomely with air conditioning and permission to eat all the fake-ice-cream-chocolate-almond-bon-bons from Whole Foods sitting in the freezer. There were two pints in there along with a neatly folded frozen bib inscribed with my favorite philosophical quotation, “Batteries included.” In response, I took my Cat Patrol duties seriously and ensured that the kitties were fed, watered, and only partially neglected. I even coaxed Segundo, who briefly threatened suicide, off a ledge.

Me: Hey! You! Get down from there! You’re gonna scratch the thing up!

At last, those seven years I spent minoring in Animal Whispering at NYU(seless) had paid a dividend. Call me an egotist, but whenever possible, I seize the opportunity to flaunt my vocabulary of 309 words starting with “a” and ending, obviously, with “zither”.

I was spared the responsibility of performing litter box janitorial service, but I was in the know about where to find the cleaning supplies should someone dribble fluids or leave a deposit in the middle of the living room floor. Those accidents did not happen.

By the second day of their servant’s respite I sensed that both varmints were feeling bereft. I, too, was suffering a degree of heaviness triggered by either their enabler’s absence, or more likely, having consumed both pints of fake-ice-cream-chocolate-almond-bon-bons that had settled like an immovable lump the size of Rhode Island in the ever expanding pit of my being.

Overseeing two melancholy cats did posit an emotional challenge. I took it upon myself to orchestrate some spirit lifting in the guise of exercise, so I threw a tennis ball around the living room expecting them to watch me chase it. But, the game they excelled at had a cerebral slant: Watch Me Ignore You.

It dawned on me that what they craved most was simple contact: a belly rub and being petted on that sweet spot around the ears — coincidentally my favorite acts of foreplay especially when slathered in I Can’t Believe It’s Not Butter! As mentioned earlier, I am deathly allergic to the kitties so this presented a conflict. They were in dire need of being stroked as I was in dire need of being able to breath — preferably through the nose without the assistance of an oxygen mask to alleviate my wall-rattling wheezing. This wheezing always happens whenever I pet cats for inevitably I will touch my face prompting a transformation that rivals that of the Wolfman but with “why-me?” whining replacing full moon howling.

Both Primo and Segundo took turns nudging my elbows with their heads, their way of urging me to take action. As someone who does not have an iota of Cirque du Soleil flexibility, there was no way I would ever be able to rub my eyes with my elbows so this seemed like a compromise solution bordering on genius.

“I’ll always be smarter than you.”

Unfortunately, elbows lack the dexterity of digits. The best belly rubs are not done with hinge joints, even hinge joints that strike a delicate balance between rubbery smooth and switchblade sharp. So, I threw caution to the air conditioning and substantially petted everyone everywhere. All three of us purred contentedly. Then, I hacked a hairball and washed my hands up to my elbows so vigorously, I left two layers of skin and what was once my watch floating in the sink … But I was still able to breath freely.

“Glad you survived us. Now back to regularly scheduled sleeping.”