Sunday night the New York Film Festival closed with several screenings of Flight starring Denzel Washington.  He is one of my favorite actors, but I refuse to shell out $20 for a film opening nationwide November 2nd that I can see at my local multiplex before noon for seven clams.  Milton did snag a ticket, but if he thought that Flight was the greatest movie ever made, he is in no hurry to sing its praises to me.  I am not feeling any suspense as I await his verdict.  It is very likely that when I see him this evening, any discussion of Flight might well be superseded by something as mundane as someone in his office misplacing the precious pizza cutter that he personally guards.

Milton and I did see two more films together – a hit and a miss.  The miss was The Last Time I Saw Macao.  We, along with our fellow audience members attending this sold out screening, chose to see this film because we were so impressed with the Portuguese director, João Pedro Rodrigues’ previous film that played the NYFF in 2009, To Die Like a Man.  That earlier film was a compelling story about a drag queen in Portugal living her life as a woman whose estranged son in the military re-enters the picture.  If this film sounds anything like La Cage aux Folles, that’s unintentional for it’s very different and ends tragically, no heartfelt singing of I Am What I Am here.

For The Last Time I Saw Macao Rodrigues collaborated with João Rui Guerra da Mata, a fellow filmmaker of Portuguese descent that was raised in Macao, a former Portuguese colony in China. 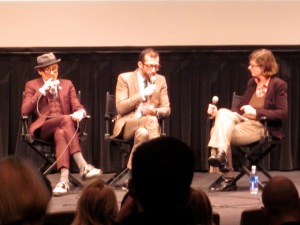 The filmmakers original intent was to shoot a documentary about how much Macao had changed since Guerra de Mata lived there thirty years ago.  Instead, they turned it into a story with film noir-type elements about a man the audience never sees searching for an unseen friend in some sort of trouble with unseen bad guys.  If that last sentence confused you, exalt in the fact that you were not attending that screening.

The dialogue is voiceover of Guerra da Mata reading his memoir about Macao and Rodrigues reading something else I was frankly too bored to recall, but they revealed afterward that they wrote the script after they shot the film.

It showed.  We suffered.

The action is all on the soundtrack while the images are focused on various scenery including numerous stray dogs and cats, building windows, a dead rat in the gutter, a shoe, a cloth-covered bird cage, etc.  While watching these images the viewer hears the action occurring off screen throughout the entirety of the film.  Sometimes the audience hears someone terrified pleading for her life followed with the sound of a loud splash, sometimes the audience hears gunshots, sometimes there’s a fantastically loud rumble as if Armageddon is approaching.  As the ending credits rolled Milton declared:

Milton: I could have made that on my fuckin’ iPhone! 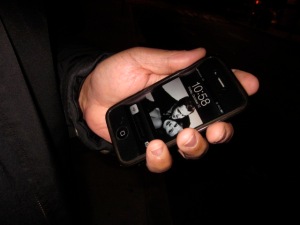 Afterward during the q&a, where much yawning was emanating all around us, one of the audience members volunteered:

Audience Member: I really didn’t understand who was being killed.

The filmmakers explained that they had made “an abstract film noir”:

Milton groaned deeply.  Afterward, he told me that the woman sitting next to him didn’t know whether to laugh or sleep.  He found her struggle infinitely more interesting than what was taking place onscreen.  He issued me a dictate:

Milton: If you write about this in your blog, don’t raise it a notch and call it crap!

The next day we saw No, a vastly more entertaining political thriller directed by Pablo Larraín set in Chile in 1988 when the Pinochet government announced they would hold a vote to get the people’s permission to maintain control.  The opposition was allowed 15 minutes of broadcast time each day for four weeks leading to voting day to build a case urging the citizens to vote no.  A clever  ad man played by Gael García Bernal oversees the No campaign.  Larraín intercut many of the actual campaign spots that were broadcast in 1988 within his film which he shot on U-matic videotape, the same format used in that era.  Compared to The Last Time I Saw Macao, No received our vote for the greatest movie ever made. 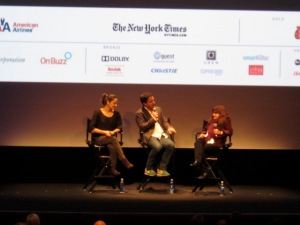 As Milton and I were leaving Alice Tully Hall for the last time until we return to the New York Film Festival in 2013 he announced:

Milton: This was a lot of fun even though I hated most of the films. 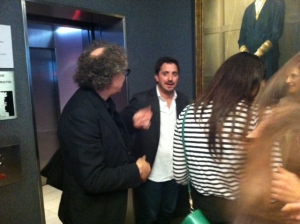