Several years ago, when I first saw this lying in the street, I was duped. 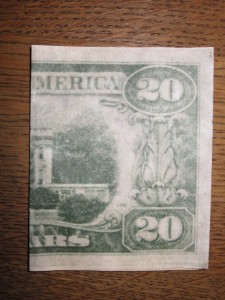 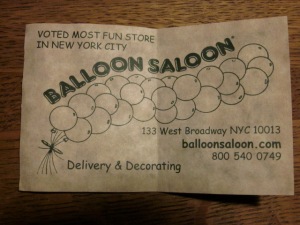 When I realized that it was Balloon Saloon’s business card held in a funny money bowl by a grizzled cigar smoking fake pioneer, this jaded New Yorker welcomed the whimsy.

This was also years before the economy tanked so those were the days when I was at my peak in the Department of Welcoming Whimsy.

If I were 43 years younger I would definitely plant one of these fake twenties in a place where my brother, Axel, would fall for the trap.  In fact, I might bring one of these fake twenties with me when I next visit my family out on the West Coast just to mess with a head or two proving that my intellectual development reached a screeching halt by my tenth year of personhood.

Is Balloon Saloon really “the most fun store in New York City”?  Who decided that vote? I’ve been a registered voter in New York since 1983.  Although the holes in my memory rival the 416,000 potholes repaired Big Apple-wide in 2011, one thing I would never forget is if there was a vote for the most fun store.  One of my close personal, and in this context, unnamed friends is a huge fan of an establishment called Purple Passion.  They sell toys, too.  Were they on that ballot?  The goods available at Purple Passion are not competing with the likes of what’s available at Balloon Saloon, the go-to source for purchasing the world on a string.

Planet Earth on a string.

Almost every weekday I walk past Balloon Saloon since I prefer to ride the express train home.  Last week, on a rainy day, I saw a tragic site a block away from the store.

Is funny money and balloons not sacred?

Whenever someone does something antisocial, I automatically blame the economy.  I suppose another highly likely possibility is if a formerly mild mannered schnook or shnook-ette heard the Call Me Maybe song one time too many causing them to violently snap and take it out on Balloon Saloon.  It also occurred to me that the culprit could have simply been Mother Nature acting like a nasty bitch.  Whoever was responsible for this violation to Balloon Saloon’s bowl of fun I cannot say with any degree of certainty, but the mess appalled me.  I looked at the scattered soggy funny money, the deflated balloons and that empty rain-spattered bowl and brooded.  Reflecting on this tragedy I thought:

Me:  Here lies another textbook illustration of the decline of Western Civilization.  The world is going to hell and I’m stuck riding that train.  I’ll probably have to stand the whole way there, too.  Nothing is exempt from a miserable demise including the funny money bowl from Balloon Saloon.

Exasperated I entered the bowels of the Chambers Street subway station carrying the burden of my existential crisis.  Symbolically the uptown express was delayed so I ended up walking five blocks out of my way for a local that I could have caught much closer to my workplace.  I felt determined and thought:

Me: If there’s ever been a time in my life to read enlightening Danish philosophy written by brainiacs with long names crammed with a’s and o’s with slashes, this is that day.

Forced to improvise, I satiated this desire by thumbing through the cartoons in The New Yorker while craving Danish pastry.

The next day, under clear skies, I left The Grind and was again walking down West Broadway en route to the Chambers Street subway station.  As I passed Balloon Saloon I saw an unexpected sight. 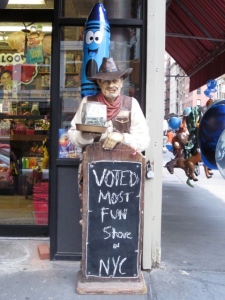 Part of me wants to say this was a sure sign of the resilience of the spirit, but the rest of me figures someone just picked up the empty bowl, cleaned it off and stuffed it with a fresh supply of funny money.  However this came to pass, I feel much less compelled to read dead Danish guys, but I could still go for the pastry. 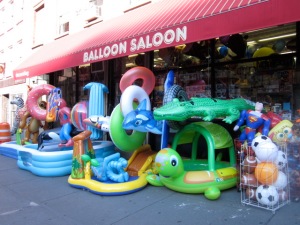