Lame Adventure 323: One of Those Days

As I have mentioned in earlier tales, I like to volunteer usher off-Broadway plays.  In return for my services I get to see theater for free. My most recent ushering gig was for a musical at a respected off-Broadway playhouse.  The audience was replete with jerks.  It would be easy to blame the heat and humidity but this theater’s temperature is set twelve months of the year at Freeze Your Ass Off level.

Approximately ten minutes before curtain a male-female senior citizen couple that looked like they held post-graduate degrees in the Department of Equally Unattractive Toads approached.  They were either married forever or siblings.

Me:  May I see your tickets please?

He brushed past me followed by her and they headed straight for two front row seats.  I resisted the urge to croak like a frog. 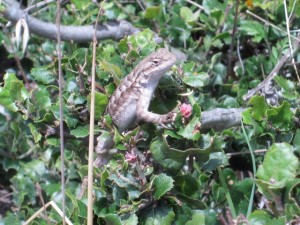 Cute lizard since I don’t have a shot of an ugly toad in my library.

Soon after it was discovered that a seat with a number belonging to a woman with a ticket had been double-booked and removed to accommodate a wheelchair bound chap.  She was understandably perplexed.  The House Manager offered to relocate her to an empty seat next to two elderly gay men, but they pitched such a fit it gave the impression that he had suggested she sit on them rather than next to them.  He repeatedly tried to explain the situation but they were livid.

Often, it’s usual to commiserate with co-ushers about audience members with the social skills of tree stumps, but I was coincidentally working with a mute, gum-chewing middle aged guy devoid of any signs of possessing a personality gene.  If the chemistry between us could be illustrated, it would be a flat line.  In fairness, maybe he had just quit smoking and was chewing nicotine gum.

My co-usher as shown in the animal kingdom.

The House Manager had instructed us to stand in front of the stage during intermission because the footlights were highly calibrated and very sensitive.  If touched they could go instantly out of whack.  He instructed my co-usher and I to stand watch at opposite sides of the stage.  As soon as we reach the stage I see a morbidly obese man leaning on my side of the stage.  I think:

Me (thinking):  The portrait of the story of my life.

I approach the man:

Me:  Sir, theater management has requested no leaning against the stage.

Me (what I want to say):  Why?  Because your BMI is a liability, and we don’t want the lights knocked off their axis by your wide load!  That’s why!

Me (what I say):  The lights are computer controlled and any contact with them risks nullifying their highly sensitive calibration.

Meanwhile my gum-chewing co-usher is staring into space possibly fantasizing about lighting up.  He’s completely oblivious to the three women on his side of the stage parked against it.  I approach the women and ask them to move.  They do.  My co-usher extinguishes his imaginary Marlboro.  I give him the stink eye.  Upon seeing me return to my station the three women resume leaning on the stage, but this time Dudley Do-nothing finally takes his mind off his chewing and tells them to scram.

As intermission is ending a woman asks me:

Woman:  How much longer is this?

This, a sure sign that she hates the show, but I’m not too keen on it, either.  Maybe I should ask her for her number?  Possibly she lives in digs with air conditioning?  I repress my inner pimp and remain professional:

She’s visibly upset but resists telling me off.

After the show, my co-ushers and I do a quick sweep of the theater. Fifteen minutes later, I bolt, grateful that this annoying gig is over. I zig and zag through the dense crowd filling 42nd Street to my uptown subway.  Even though I’m subject to a three-minute wait and the platform is hotter than the Sahara, I can still feel the residual chill from the Arctic-like temperature in the theater.  I don’t feel like I could collapse from heat stroke with a thud.  The express train pulls into the station.  It’s not terribly crowded and although I could grab a seat, I let other passengers do so instead.  I only have to travel one stop.  Life is good!

Free as this butterfly!

My thoughts return to my favorite sports, eating and sleeping. I absently move my right foot. It feels glued to the car’s floor.  That’s when I realize that I’m standing on a huge, soft sticky wad of gum.  It was definitely one of those days.