A few weeks ago, my buddy, Coco, complained to me about an owl cooing outside her apartment building in lower Manhattan.  Apparently, this bird’s late night/early morning warbling routine has been impairing her ability to get a restful night’s sleep.

Me:  I don’t think that’s an owl.  It’s probably a mourning dove.

Coco:  Whatever it is I wish it would shut the hell up.  It’s driving me crazy!

How I became such an authority on owls vs. mourning doves is that ten years ago I briefly dated a tree-hugger named Mindy.  Whenever I think of this lass I’m reminded of an orifice (not the ear canal).  Read on … She confided to me that she despised the corporate world so much she wanted to craft her own feminine hygiene products for personal use.  My usual witty repartee eluded me at that moment possibly because the vast majority of women I’ve dated have wanted to shoot films, write books, act in plays, etc.  Being in the presence of an aspiring tampon maker was a first (note: there has yet to be a second).  Our union ended with a thud during pillow talk when she revealed she’d rather see someone that works at the UN.

During an earlier less spirit-deflating visit I complained to Mindy about what I thought was an owl cooing outside my window.

A decade later I’m at work, sitting at my desk, discussing a design project with my friend and colleague, (not) Under Ling (anymore).  Eager to seize the reins on a new challenge, she suggests that she’ll make several mockups of this idea that we’ll present to our boss, Elsbeth.

Then, the neighborhood mourning dove flies onto our windowsill. Havoc ensues.  (not) Under Ling (anymore) knows that I have been obsessed with getting a good picture of this creature to share with Coco.  I have even suggested to my colleague:

Me:  For all we know this could be the actual bird that’s always waking Coco!

One of the many hats (not) Under Ling (anymore) wears is that she’s the company photographer.  She shoots pictures with this very intimidating digital Canon camera that is called something like the Behemoth. 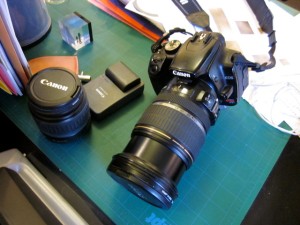 It weighs about the same as the Liberty Bell.

We both spring into action.  (not) Under Ling (anymore) wielding the Behemoth, hops onto the counter as if her Converse sneaker soles have sprouted springs.  She patiently crouches at the window like a member of the paparazzi waiting to capture the perfect “gotcha!” shot of this critter. 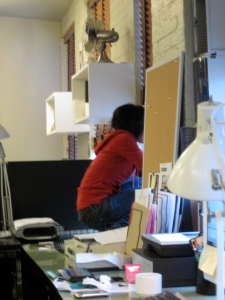 "Gotcha!" shot of (not) Under Ling (anymore) perched at the window.

So close and yet so far "gotcha!" shot. "If only Elsbeth would have let me buy a zoom lens for this camera..."

Yet, our bird is fidgety.  It flies from sill to sill, and only perches momentarily.  I fire off a quick shot with my PowerShot.

Can birds get liver spots?

We follow it as best we can, narrowly avoiding colliding into each other when we are certain that it has moved onto the windowsill in Our Leader’s office.  Elsbeth is oblivious to the Two Stooges frantically scampering outside her office door.  After the bird disappears from our view we resume focusing our attention on our assignment.  Then, in an excited voice, (not) Under Ling (anymore) announces:

(not) Under Ling (anymore): The bird’s back!

My heart races.  She grabs the camera and is now perched at a window in the back of our office waiting to fire away.  I commend my friend for taking this interesting shot in white silhouette.

(not) Under Ling (anymore) insists it reminds her more of this mythical (?) creature. 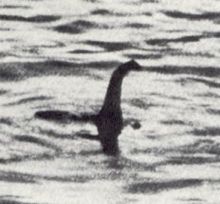 Later that evening, I email Coco a link to a 24 second video of a mourning dive cooing with the subject heading, “Does this sound like your owl?”

Coco’s response: Yes! Maybe my owl is really one of those bastards.

Maybe it’s even the one perched outside our window? 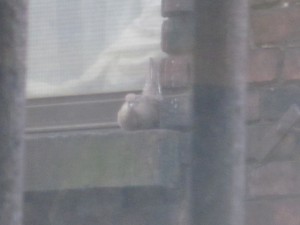 "This feels so good on the tail feathers, it makes me want to coo even louder!

7:32 am update email from Coco: That dick bird is still cooing…..argh!  It doesn’t quit!