I am kicking off my three-day holiday weekend after work with my friend, Albee.  When I last saw him in December, we dined at a Spanish restaurant in Greenwich Village called Café Espanol.  The fare is simple,  home-style grub.  We decided to pass on ordering the house red and popped an extra seven bucks for a Tempranillo that the waiter suggested.  We also liked the wine’s name and label – Tempra Tantrum.

After we paid, the waiter returned with our change which included a Where’s George? dollar bill.

For those unfamiliar with Where’s George?, it’s a geek web site that tracks currency.  The site has been investigated by the US Secret Service because they used to sell rubber stamps and it’s illegal to deface currency.  The Secret Service informed Hank Eskin, who started the site in 1998, that the stamps are considered advertising.   That motivated him to  stop selling them, the Secret Service got off his back, and the site continues.

A not too big big deal to the Secret Service.

More Where’s George? trivia is that users are considered Georgers.  Apparently, unstamped currency may also be registered on the site.  These unstamped bills  are known as stealths in George-speak.  I imagine the vast majority of stamped or stealth Where’s George? currency has been entered by procrastinating students or glazed-eye types that work soul-sucking, get rich poor quick  office grinds.  Hm, what must that be like?  I don’t think anyone would take a pause during foreplay and suggest this buzz-kill:

Foreplay Pauser:  Hey, what do you say, let’s climb off each other and track all the cash in our wallets now?

I had encountered another Where’s George? single a few years ago shortly before visiting my niece, Sweet Pea, in the San Francisco Bay Area.  I thought that Sweet Pea might like to go online and track the bill.  She found that idea about as enticing as watching grass grow, but still wanted the bill.  Since I have such a winning way with children, I vaguely recall barking:

Me:  If we don’t track it, you’re not going to inherit it!

Although I was carrying my current Where’s George? dollar in my wallet (tucked in a side pocket) during my most recent visit West, I completely forgot about it since I’m infected with the same sky-size hole in my memory as my boss, Elsbeth, who recently asked me:

Elsbeth:  What day is it?

Elsbeth:  I meant to look at my calendar, but I forgot.

Me:  That’s why you have me.  [pause] What were we talking about, Boss?

I looked at my bill and wondered where it might have been, so I went online to check it out.  First, I looked at some of the top 20 traveled bills.  One bill has traveled 24,000 miles since its initial entry in Newport, Vermont in November 2008.  I wondered: 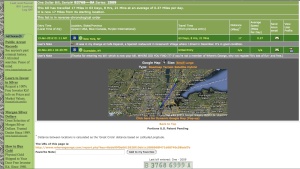 Off to a snail slow start.

My Where’s George? bill was entered in Scarsdale, New York in November 2011.  Thus far, it’s traveled 17 miles to reach me.  Clearly, this Lame Adventures single has exited the starting gate at a crawl.