Due to my growing like kudzu contempt for the US Postal Service for their consistently crummy delivery of my favorite magazine, The New Yorker, I had decided that 2011 was the year I was going to join the legions of former holiday card givers and end my tradition of sending holiday cards out of spite.  I briefly considered e-blasting Jib Jab e-cards but I decided against that since most of us are already inundated with too much crap on the web.  Luckily for the US Postal Service, my dear friend, Milton, talked me into sending holiday cards this year.  He is right; recipients like to receive hand written paper cards, but considering that he was sending sixty, I’d be inclined to sign my name with a rubber stamp.

Around Thanksgiving I embarked on my annual search for the appropriate card in questionable taste.  Milton feels very strongly about sending traditional holiday cards.  Pictured below is his elegant greeting of the season that he found in his favorite card store, Papyrus.

A holiday card dripping with elegance, taste and a ton of glitter. The crease comes courtesy of my letter carrier, Alice Sneer.

Milton sent sixty of these beauties and in each he hand wrote a personal note.  In mine he composed this heartwarming sonnet: “Have a truly cynical Xmas!”

When I opened it half a pound of glitter fell out and I anticipate I’ll be seeing shiny stuff sparkling in my humble abode well into 2012.  That’s cool with me.  I much prefer it to the large economy size jar of 183,217 popcorn kernels that I spilled in my sanctum sanctorum’s kitchen 28 years ago.  I’m still finding those kernels through today which is amazing since I even had my kitchen floor replaced.

Traditional holiday card tied with swatch of real ribbon from my best friend from college, BatPat.

There used to be a hole-in-the-wall greeting card/gay male novelties shop on Christopher Street I frequented for all of my greeting cards called Alternate Cards.  The guys that ran the place were very quiet men of South Asian decent.  Forgive me for being so narrow-minded, but they did not strike me as the type of chaps that reveled in selling penis-shaped pasta or cards captioned, “My left leg is Christmas.  My right leg is New Year’s.  Come up and see between the holidays.”  Yet, this shop was the best source for off-the-beaten-path holiday cards in New York.  Unfortunately, they suddenly shuttered about three years ago.  I don’t know if it was for the usual reason terrific businesses cease to exist — their rent was raised obscenely high, or if they were actually a front for al-Qaeda.  I do know that I miss them terribly. 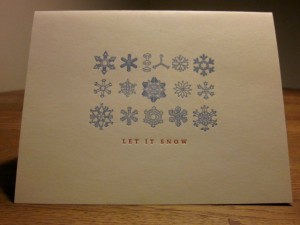 Card from my boss, Elsbeth, with note on the back, "This Card was Printed Letterpress by Hand on a 100-Year-Old Chandler & Price Platen Press." Excluded note, "This card was not purchased at WalMart."

Then I realized I could send holiday cards based on cartoons that were published in The New Yorker.  I decided I would do this forever, but forever ended this year when production of tee shirts, mugs, and greeting cards featuring New Yorker cartoons ceased.  That was another devastating loss.

Adorable card from my sister, Dovima, that instantly triggered my cat allergies.

Last summer, the fine folks at Café Press gave me a sweet deal on their Stranger’s Day cards by New Yorker cartoonist Roz Chast.  I decided that they would be my new go-to source for holiday cards, but there was one barrier to this brainstorm.  Most of their cards were “eh” at best, and the few I liked said, “Merry Christmas” inside. I have several Jewish and atheist friends so that was a no go.

Hand-selected just for me card from my friend Martini Max.

Many of the funniest holiday greeting cards I’ve sent through the years were published by Noble Works, but I was at a complete loss as to where to find their cards.  I Google searched them and within a nanosecond discovered that they’re based in New Jersey, they have a vast library of a variety of greeting cards available online, I could buy my holiday cards directly from them tax-free, and if I needed any further incentive to hit my enter key, they were including free shipping, too.  As much as I would like to say that Noble Works online is my new go-to source for holiday cards, I have learned the hard way that this type of completely satisfied customer thinking invites a curse.  Therefore, I will offer my endorsement of Noble Works – and hope that this company outlives me. 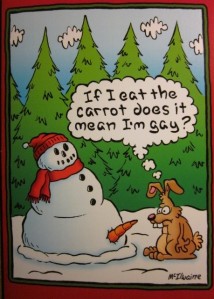 What is not widely known is that this wabbit is a direct descendant of Bugs Bunny.