Lame Adventure 113: The Return of the British Comedy Invasion 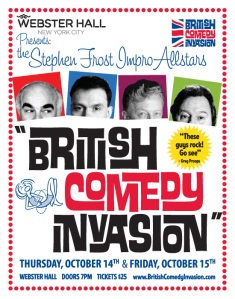 The British Comedy Invasion headed by funnyman Stephen Frost returned to the Marlin room at Webster Hall with their special brand of uproarious improv.  Bill, a tile vendor-friend from California, was visiting and wanted to get together with Milton and I after work.  Milton had already made plans, but I recalled how Zen-like Bill was during our meeting that morning when there was a thunderous crash in our showroom’s back room as the distinct smell of something burning wafted into our elegantly designed shrine to tile, bath and lighting fixtures.  While one member of our sales team checked to see what had smashed to the tune of a million dollars worth of bits, another shut a window and announced in a cheerful tone, “The burning [editorial suggestion: of Atlanta] is outside!”  The first sales associate returned with an explanation of the crash, “It was nothing.”  This made me wonder how he would have described an event like the bombing of Dresden:

Sales Associate:  Just some smoke.  It was nothing.

I suggested to Bill that we join Ling and Lowell Milton-less and see Frost, Steve Steen, Andy Smart and Richard Vranch.  Bill was intrigued.  Although we could have bought tickets on line, I thought they might be available at the door, which I don’t think they actually were.  Fortunately, a venue worker introduced me to Janet, who was working as the boys’ manager – the same role that Elaine, my UK-based friend and colleague, filled when they played Webster Hall last June.  As Janet spoke to me in her mellifluous British accent, I asked if she happened to be acquainted with Elaine.  She and Elaine are great buds, and being Elaine’s American friend guaranteed Bill and I entry to the show.  In the future, when they play Webster Hall again – and surely they must return – I urge anyone wanting to see them to purchase tickets online ahead of time. 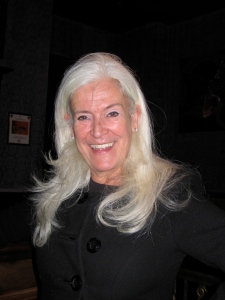 Janet to the rescue!

The four of us settled in a banquet as we waited for the show to start.  A  Buddah-shaped woman sat next to me in what should have been Milton’s place.  Lowell asked, “Who is that?”  I explained, “She’s with us.  She’s improvising being our friend.” 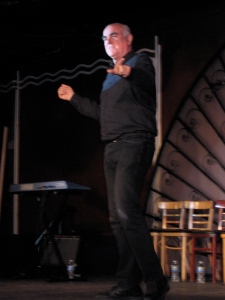 The boys delivered their usual brand of spontaneous mayhem and lightening fast wit but this time they even seemed a little more physical than last, with Frost sucker slapping Smart not once, but twice, and Steen, improvising a circus elephant’s trunk by waving his arm, and then dousing Frost in the face with projectile water shot out of his mouth.  This brought the house down, as dripping Frost announced to no avail, “That’s not funny!”  Vranch provided improvised musical accompaniment that was a joke in itself when he played a completely unfamiliar tune in a skit about the Beatles.  Smart bellowed, “What Beatles song is that?”  Vranch defended his performance and said it was an improvised Beatles tune.

Their repertoire is jam-packed with numerous funny bits inspired by audience shout-outs that these comedy veterans twist into contorted stories such as one about Queen Elizabeth’s ill-fitting thong with the Windsor crest on the label that somehow ends up inside out, and possibly on Prince Philip, or maybe it did not go quite that far, or it went even farther.  This quartet is equal to musicians entering a zone that begin to riff and every note of what you hear sounds great as you’re listening but when you leave, you know you’ll never be able to hum what you just heard.

Bill was particularly impressed with Vranch telling a story about cooking and wooden underwear (intimate apparel was on the audience’s mind Friday night) in fluent gibberish accompanied with flamboyant gestures, which Smart hilariously translated as, “I am not a well man.”  How one could speak nonsense in what sounded like an actual accent from some remote country, while the other spontaneously tells the story in English is brilliant to witness.

Steve Steen’s specialty is the dirty joke, and he seemed to thrive in a skit with Frost where they played surgeons in an operating theater removing a patient’s testicle, but somehow by the skit’s end Frost had sewn Steen’s shoulder to the unseen patient’s half-hollow nut sack.

As usual, the foursome wrapped the evening’s entertainment with a routine that grows in hilarity as it completely implodes.  This is where they tell a story, but each guy voices another guy’s character.  Therefore, they have no clue what anyone is going to say.  This routine should come with a warning: if on medication do not attempt doing this at home, but if you do, this might be a fine time to operate machinery if your goal is to drive yourself off a cliff.

The skit was something about a John Wayne-type father disapproving his daughter’s marriage to a weasel as the vicar prepared to conduct the service.  As this skit descended into complete chaos, Frost, who was mouthing the father spoken by Smart as Smart stood across from him mouthing the daughter voiced possibly by Frost  … I think, or possibly it was the other way around since this zany routine is almost as hard to follow as it is to perform.  Frost, his head about to explode, announced, “I don’t remember my character!”  Neither did we, but it sure was funny.  I think he may have then sucker slapped Smart again, or maybe that second slap happened earlier.  I do know that however that skit ended, all was right in the world of British Comedy Improvisation once more. 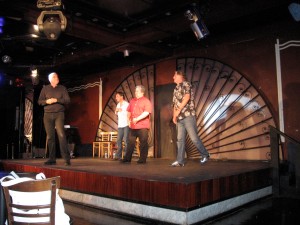 Expert funnymen from across the pond (left to right) Frost, Vranch, Steen and Smart