Lame Adventure 81: A Squirrel, a Beagle and a Rabbi All Walk into a Bar …

In actuality, I am not a rabbi, nor was I in a bar, but it was after work on Tuesday so I could have sorely used a drink as I was walking down a street in the West 70s en route to my sanctum sanctorum, when I noticed a squirrel ravenously nibbling away at whatever gourmet-delicacy (to a squirrel) had coated a Land Rover’s mud flap.  This little squirrel, that had either made the journey down from Central Park or up from Riverside Park, was in overt stage-four gustatory bliss.  I could almost hear it shouting in-between mouthfuls, “Mine, all mine!”  <burp> 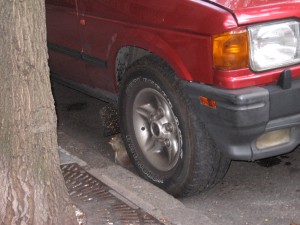 "You should try this if you need more tone in your upper arms."

"I can't control myself!" 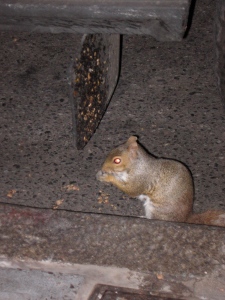 Then, Tanner, a 6 1/2 year old beagle-basset mix, arrives on the scene needing to take a piss that rivals Seabiscuit when the beagle half of his genes tugs hard on his leash and he bellows at his caregiver:

Tanner (squinting):  Is that a fox I see, woman?

The squirrel, playing it safe, darts up a tree.

"This strong silent pose scores a hit with chicks."

Squirrel:  All these people and now a dog?  What’s next, a telemarketer is going to call?  I’m just trying to enjoy a peaceful dinner!

Relieved of his obligation to give chase, Tanner’s basset hound side kicks in.  He steps off the curb and with a faraway look in his eyes takes a luxurious leak.

Me:  Tanner, can I take your picture?

Tanner:  Ask her, you idiot.

Tanner’s feeling prickly; this is his walk-time and he’s purposely pounding the pavement to accomplish his evening business in the relief department.  As hard as his caregiver tries, he refuses to offer his handsome face to the camera for more than a nanosecond.

"Whatever you do, take it fast and don't shoot my right side."

Me:  Tanner, aren’t you ready for your close-up?

Tanner (groans):  Who writes your dialogue?  Just take a picture.

Meanwhile, the squirrel is sitting on the curb watching and nibbling.

Me:  What exactly are you eating?

Squirrel:  Berries and leaves sublimely seasoned with highway repair tar.  You’ve never tasted anything quite like this.  Trust me.

Tempted by this testimonial, when I returned home, I tried some with a beer, vomited profusely and will probably call in sick at work for the rest of the week or until the full body rash heals.

This entry was posted in Humor and tagged basset hound, beagle, squirrel, Upper West Side. Bookmark the permalink.

10 responses to “Lame Adventure 81: A Squirrel, a Beagle and a Rabbi All Walk into a Bar …”