Last year, Milton, Albee and I attended an off, off Broadway play called Rambo Solo produced by a theater company called the Nature Theater of Oklahoma (which is actually based on St. Mark’s Place in lower Manhattan) and staged at one of my favorite downtown theaters, SoHo Rep. This play (now closed in New York) is a one man show performed by its creator, Zachary Oberzan, who stands on a stage and tells the story of the novel, First Blood, from start to finish.  You may be more familiar with First Blood as the Sylvester Stallone film that is often called, Rambo, or The First Rambo Movie.  First Blood is the only film in the Rambo series I have ever seen.  I saw it for the first time last year before seeing this play.  I did not inherit my father’s Sylvester Stallone fan gene. 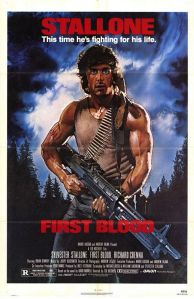 SoHo Rep removed the seats for this very imaginative production.  The audience sits on pillows over shag carpet covering the floor watching Oberzan tell the story of this novel in its entirety to the best of his recollection.  Projected on bed sheets serving as three screens behind Oberzan are three videos of him recreating this entire story playing every character in his 220 square foot apartment.  For props, he uses everyday household items.

Although it was a massive amount of Rambo to swallow, I thought it was both very entertaining and very creative.  I highly recommended it to many of my friends, but none chose to go, although Rhonda told me that she walked past SoHo Rep on her lunch hour and looked at the poster in the window.  Milton bought the DVD.  Only Albee thought it was a steaming pile of horse shit, but he later admitted his judgment might have been impaired because his spine felt disjointed by the show’s conclusion.  He needed to visit a chiropractor the next day.

Oberzan’s apartment is a very accurate depiction of many New York City habitats.  His home is claustrophobic, cramped and filled with crappy furniture.  Hollywood films and TV glamorize apartment living in New York all out of proportion.  The real deal has much more in common with the garrets where people like Zachary Oberzan and I reside.

My brownstone has 18 units and the average apartment probably measures around 300 square feet.  Since I lack Milton’s flair for decorating, it took me almost 20 years to figure out how to furnish it tastefully, so it’s no longer a source of shame when guests visit.  Milton thinks it’s a charming abode.  He didn’t know me when it looked like the aftermath of a bombing in Beirut.  Yet, no matter how clean, neat and organized I keep it, my humble writer’s cave is always going to be a shoebox … Unless when I have that dream.

Garret furnished by someone with taste.

Recently, the tenant living above me, a very lovely young woman who I once had the pleasure of folding clothes with at the laundromat, was engaging in a very serious and very loud pre-Valentine’s Day row.  She was wailing and threatening suicide, but I did not hear a peep from the respondent.  I know she is not a loon, so I determine that she is not talking to an imaginary friend who might be stiffing her on a chocolate heart.  This emotional exchange is probably taking place over a cell phone.  What can I do about it other than feel profound embarrassment over my unwanted eavesdropping?  She’s a decent neighbor; always very pleasant whenever I see her in the hall.  Should I knock on her door and offer my one good ear, and save this child from throwing herself out the window over someone that might be an unworthy turd?

What I do:  I mind my own business and take a nap.

I dream that very New York City dream, the dream where I’m in my 312 square foot dwelling hearing my upstairs neighbor emoting, but I find a portal leading to a bigger space and voila!  I have quiet and space!  Then, I wake, elated, and it is quiet.  I sit up on my bed, looking for my portal, but my modest abode looks exactly the same, portal-less.  I realize that I have been foiled again by that living-in-a-small-space dream that I, and many other small-space-dwellers, share.  To reinforce this reality, my upstairs neighbor is back on the phone venting in surround sound once more with feeling.

Thought 1:  Get through this, girlfriend.

Thought 2:  How can I Google search this dream?

I Google search the dream using this phrase:

recurring dreams of new yorkers about living in a bigger apartment

Upstairs neighbor update:  thankfully, she did not off herself, but engaged in loud makeup sex late that night, presumably with a partner other than a pocket rocket.

Not invented by NASA.

This entry was posted in Humor. Bookmark the permalink.